A few weeks ago, Wexi Skurnik’s ho-hum, totally-normal wingsuit solo turned into a wingsuit oh-no very quickly. Thanks to his CYPRES 2, he survived to tell the tale — and he was happy to do so. Here’s Wexi’s CYPRES save story, in his own words. Chase the light, kids!

I learned to jump here in Finland in March of 2017. My goal was always to wingsuit.

So that’s what I was doing when I had my CYPRES ride.

It was just a normal day, otherwise. I was going jumping with my wingsuit. A solo jump, because my home dropzone just has a Cessna 182 and only a few wingsuiters. The weather was getting a little bit cold here in Finland, so I had a little more on than I normally wear under my Barracuda Power.

The wingsuit I was jumping was not tailor-made for me. It’s a stock wingsuit, so it’s a little bit tight in the upper body. During one previous jump (when I also had more clothes on), I had a similar problem. On that day, it was also colder, so my hands were a little frozen.

When I did the opening movement, the handle got obstructed by the wing fabric as my arms paths of movement were a bit off. Then I made a mistake. I didn’t go through the whole opening movement again at the end. Instead, I started digging for the handle. During the digging, my body position, including my eyes, went down, and I ended up spinning quite a bit.

Since the wingsuit is a bit too tight, the reserve handle has a tendency to go inside; this time, it didn’t go inside, but instead got stuck just a little bit out of the wingsuit, so figuring out how to extract it was tricky, and that was made much worse because the spinning was so aggressive.

First, I grabbed the cutaway handle

Just when I did, I thought that this won’t do me any good as I had not deployed the main. At that point, I had my thumb in the reserve handle and was just beginning to pull it — but then the altitude was so low that my CYPRES activated. I was going head-down at 200 KPH, so I just thought: I sure hope this German tech works. And it sure did.

I was over a train yard, and my wingsuit wings were still closed. There was a big warehouse directly beneath me and, because I was so low on opening, I was heading for the roof.

Luckily for me, I managed to avoid that

But then there were so many other obstacles in the train yard around it that I was about to hit something else instead. I managed to steer the other way. I wasn’t injured, though. Honestly, I’m really surprised that I didn’t actually hurt myself — just some minor bruises. But I didn’t. 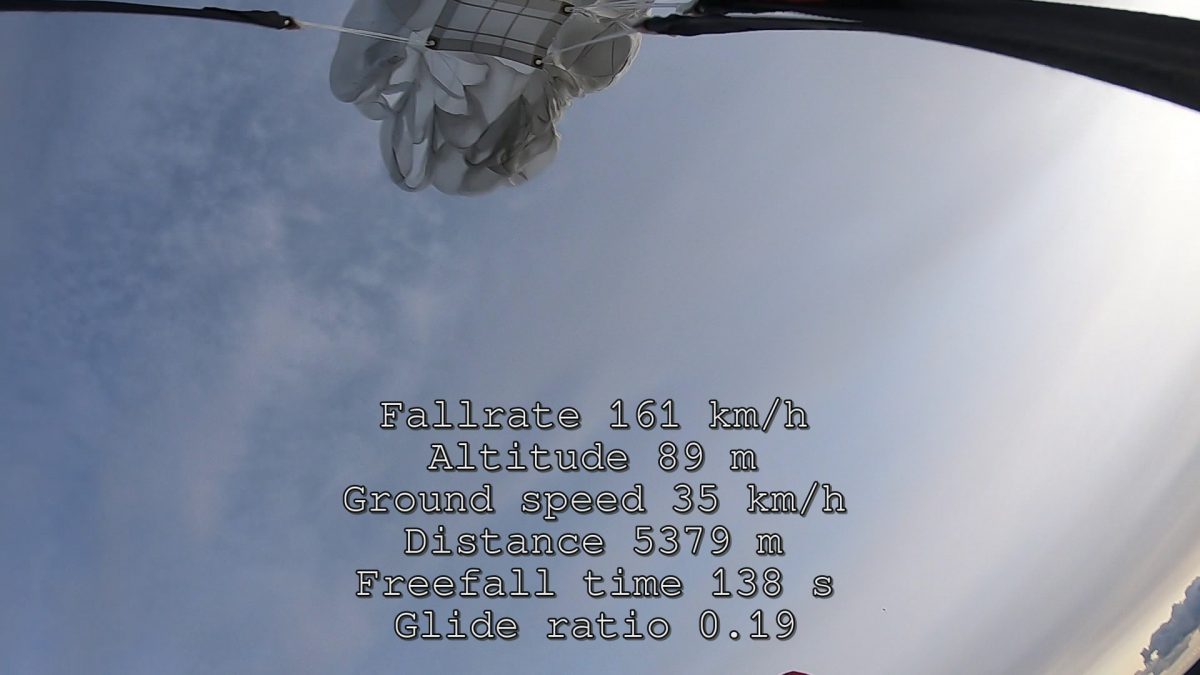 To this day, I’m surprised that I didn’t at any point in the jump get the idea that I was about to die. A friend of mine told me that maybe — if I had — I would have pulled my reserve earlier. That’s a possibility. At any rate, it’s a good thing that we have the AADs, because I think if you get too accustomed to jumps and everything always goes to plan, you’re in a difficult position from a skills standpoint when you find yourself in a situation that deteriorates quite rapidly. I can’t think of any good reason to normally jump without a CYPRES.

My message to other jumpers is

you should of course use a CYPRES — because things can happen. Unpredictable things! I also add now that it is every jumper’s responsibility to know how it works and what the normal activation altitude is. In conversations with other skydivers, I am surprised how many still have the misconception that the default activation altitude is higher. My reserve was still opening at 89 meters, as you can see in a screenshot from the video.

The problem I had originated from the fact that the wingsuit I was jumping didn’t fit me well. Now, I advise other jumpers that the suit and other gear you’re wearing should fit you very well so that, when you’re in a difficult situation — like the really aggressive spinning I was in — you will be able to act. Of course, for just this reason, I’m not going to jump that wingsuit again.

Also: Another thing that was to my benefit here, as far as not getting injured, is that I am also used to landing in places other than normal dropzones. I would strongly suggest that, if you have the opportunity to learn to jump in other places — like inn-hopps and beach landings and such — you should definitely do that. Of course with your current skill level and safety in mind. Landing in a normal landing area, where you have all the space, is obviously optimal, but when things go wrong, you will probably find yourself somewhere else. If you know how to handle yourself, that will probably save your legs — or even more.

See also other save stories we got.