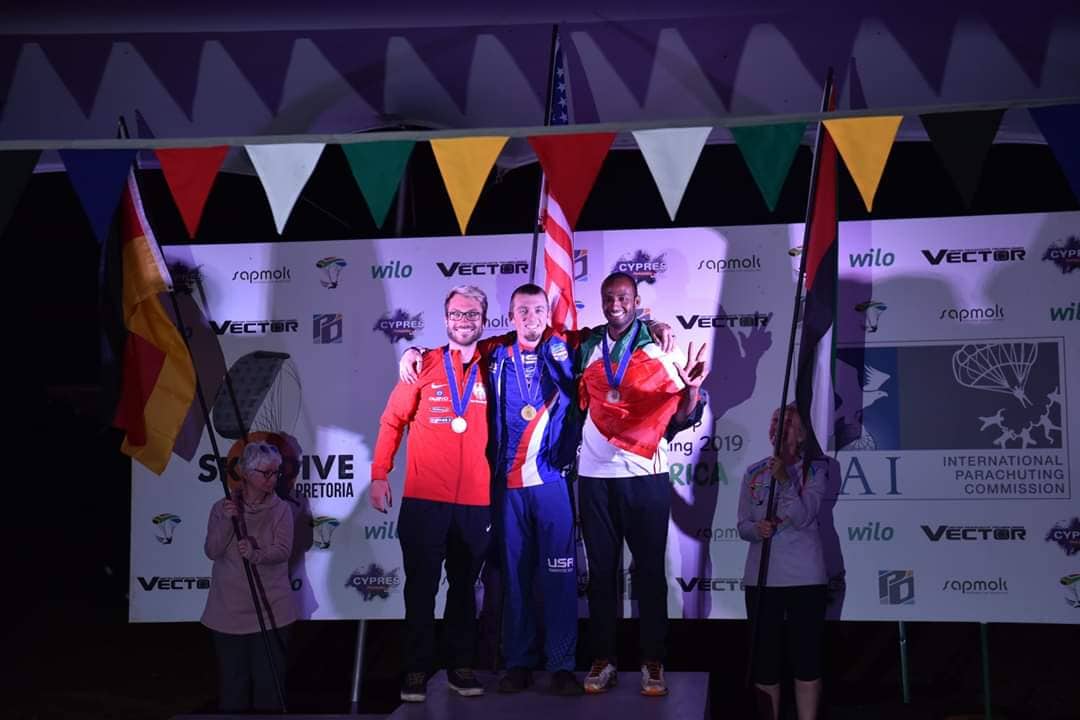 How did you get to this point in your career?

Brian Vacher (former PD Factory Team) was running a summer camp at my own dropzone and showed me videos of him on a video iPod of him doing freestyle swooping from back in the day – and I always thought that I want to do that.

Before you start freestyle swooping, you have to get into high performance flying. I came to performance competitions first, and along the way I saw a lot of friends getting hurt doing freestyle. But then, seeing the competitive side of freestyle growing more again like with the events in Copenhagen, and being able to have an international championship, I started training and doing more and more freestyle moves after work jumps. It worked out pretty well pretty quickly I guess – with the medal now, that has given me a  lot of motivation. I’ve got the silver now. The next step is gold.

I usually jump my 62 for work jumps, but this year I decided to step back to a slightly bigger canopy – to a 71 – so I could concentrate more on freestyle rather than on performance turns after work jumps.

How do you feel about the way freestyle is judged?

It is definitely hard to get right. I think there should be some things that are taken into consideration. For example – the control over your canopy within your swoop in freestyle. In my third round, if you look at my canopy, it is flying to the right side and is nearly touching the ground.  That is one of the reasons I made it out of the water, but still if it had been flown completely smooth, the canopy should have stayed over my head for the duration of the whole swoop – which it didn’t. I think that should be part of how it is scored also because I think a clean and nice freestyle swoop should be with the wing over your head and not just making it out of the water because you have speed on water, but staying in control of your canopy for the whole swoop.

I think there are a lot of people unhappy about how it is getting judged. A lot of people seem to think that the judges might not yet be able to judge all the moves because they actually think some of the judges are not even sure how a move should actually look. I can’t really say anything because I haven’t talked to any of the judges about it, to be honest. I do my stuff, and they do their job. If I do mine well, then things will be fine. I guess if some people are putting a lot of work into it, and then their moves are not scoring as well as they should, for them that’s a reason to complain.

With the current rules, it is not so smart to try to invent a new trick and show it in comp because there are no rules for that. There is no clear way for the judges to evaluate that. They can only stick to the rules – exactly what is written down. For myself, I can only combine the exact tricks that are written in the rules. That’s what I did and wanted to do. If there are new tricks being put into the rules that are ready to go and use, for sure – I might include that in the tricks.  I might start training on that, but for now knowing that it always takes time to bring new tricks in to competitions. The Focus will be on what’s in the set of rules at this moment. I knew from the last freestyle competition that that move and the way I fly it scores pretty well – so why change something if it is going to work again?

How do you deal with the pressure of competition?

First of all, depending on the conditions, it is somewhere between challenging and scary – if you know you are going to fly down a pond at 4,500 feet, downwind, and then you are going to let go of your controls. It is like playing with your head, a cool thing to stay focused in the plane and still doing it – not getting too nervous. It might be called freestyle but it has still got its boundaries. I haven’t done this for so long that I’ve tried every combination of the tricks. It is still a lot of fun.  With classic performance swooping – it is mostly the same. Every competition you either have a left carve or a right carve, but the rest is the same. But freestyle – mixing things up and trying new things, it is what I am going to do now. What we heard from a lot of competitors is they want to see different tricks from people, so a lot of them already did three different tricks in three different rounds. I am also going to try to work myself to a point where I can show more tricks than just that one.

Do you aim for consistency to gather as many points as possible, or are you more likely to push hard and take risks for a possible big achievement?

With my performance flying at the moment, flying conservatively is not going to bring me to a podium and win world class. I would rather try to push at one discipline, which for myself would be speed where I try to aim for one of the first slots. This approach got me some zeros already because I am pushing a little bit too hard, but in the end if I fly super conservative and I make it to the top 10 in the world, it wouldn’t really get me too much. I would rather push for a medal in one discipline, and then in the end when my overall level gets to a point where I can push for overall medals, then for sure consistency is going to play into that again.

How do people get into freestyle? Should focus on performance first?

I don’t think that needs to happen because there are some things that are not actually into performance swooping.  I get that. If you want to performance swoop nowadays, you will be jumping at wing loads somewhere between 2.8 and 3.4.  You need gear just for that, and there could be someone trying to get a freestyle competition jumping his normal work wing and being very good at freestyle. Those people can get into freestyle competitions. They can qualify in whatever format. They don’t have to fly a super high performance wing at a crazy wing load to be able to show nice freestyle.

Overall, how did the world cup go?

It was a challenging competition, but its a World Cup after all. Wind conditions, elevation, the heat out in the boarding area all together didnt make it easy. Most of the people were new to the elevation, but I think in the end everyone managed quite well. The Comp had ups and downs for most of us but most important we all had a lot of fun!

Thanks very much, and congratulations again on a great achievement.

Thanks a lot to my sponsor, CYPRES. I am very happy about the continued support. I will be looking forward to working together in the future.