This article was first published in 2006. Its thoughts are still valid and withstood the test of time.

The difference in philosophy matters

In order to understand the CYPRES quality and maintenance program, it is necessary to understand Airtec’s philosophy.
CYPRES was born as the result of a terrible accident, Helmut Cloth watched his best friend die during a skydiving mishap where a proper AAD could have made a difference. This was at a time when the use of an AAD by an experienced jumper was generally thought to be “unacceptable” – indeed it was necessary for the few experienced skydivers using AADs to “hide” them. Airtec was created to design the first AAD that skydivers would personally want to use, and would feel comfortable jumping with others using it. 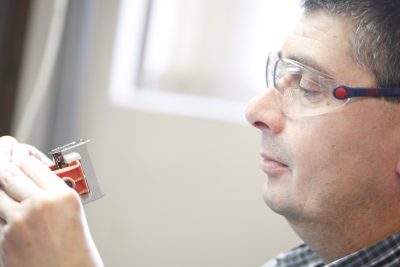 In addition to a revolutionary design (yes, it was so in the late 90’s!) including unheard of accuracy and reliability, and a complete new way to initiate reserve deployment independent of the ripcord, Airtec setup an absolutely non – typical production and quality system for electro-mechanical devices. Why? As the manufacturer of a critical device, which is in use all over the world, under all possible conditions, we feel responsible for ensuring that each CYPRES works with maximum reliability – even though it is only a “backup” system.

In order to accomplish this, it was necessary to leave behind the usual commercial equipment manufacturing and quality systems that treat reliability in terms of “acceptable failure rate”, and to set aside the usual manner of making repairs only after it is determined that something is wrong.

Airtec believes that there should be NO “acceptable failure”, and therefore decided that it is necessary to take care of potential problems BEFORE they are detected or occur.

This goal mandates a premium maintenance program – often found with life saving equipment, but generally unheard of with commercial electronics.

The comfort factor of reliability

Now, 15 years later*, the comfort factor of this reliability has become expected rather than demanded by our customers. Achieving this goal was not easy – it specifically required the combination of our innovative design, a unique manufacturing process (more than 16 days for a CYPRES 2 unit), scheduled maintenances, and a lifetime limit of 12 years* . 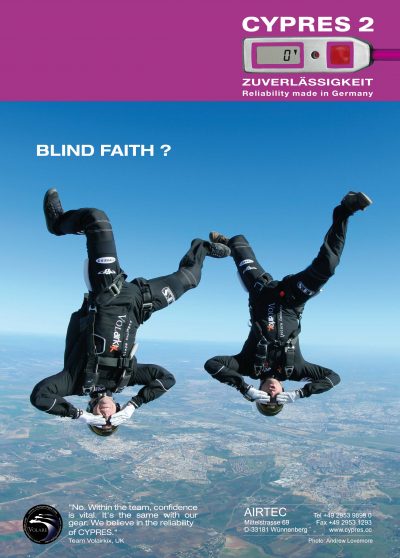 The result is a level of reliability unheard of at the late 90’s. During this period, several generations of skydivers have entered the sport, learned to skydive with a CYPRES-equipped rig, and continued to skydive with CYPRES in their personal rig. At the same time, skydivers have become accustomed to the level of reliability we have achieved, and consider it to be a “given” fact.
Skydivers who have been saved by a CYPRES, consider the unit to be priceless. However, the majority of CYPRES units are pretty much “forgotten” – simply switched on in the morning and used day to day. Forgotten that is, until it is time for the scheduled maintenance. The rigger tells the skydiver that it’s due, the unit is taken out of the container, and sent away. The skydiver who has never been saved by CYPRES, often only remembers this part – the AAD had to be sent off, and there was something to pay for.

The fact that CYPRES is an active working part of the rig (as is the main canopy and harness) on every single skydive, is usually overlooked.

Many skydivers think that CYPRES only “does something“ when the parameters are met and the unit activates. The fact is, an activation is only the result of the continuous work which was done before, on this and every single skydive. CYPRES is also making decisions, and doing one of its important jobs on every jump when it decides an activation should NOT occur!
If a piece of equipment like CYPRES always works unobtrusively and reliably, and doesn’t deliver any observable practical benefit, the cost and “hassle” of the scheduled maintenance and cost of replacement after 12 years are sooner or later the only thing the owner remembers. The fact that it was there, monitoring each second of every skydive in the past 4 years (time for maintenance) or 12 years (time for replacement), and did this job without creating a problem, becomes secondary.

CYPRES maintenance has often been discussed at length in various channels and on site. Is it just robbery? Is it technical overkill? Is it the result of a faulty design? Should it be able to be done with far less effort in the field by a rigger? 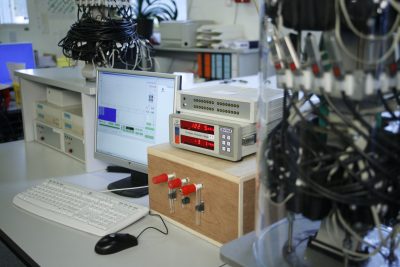 The answer to all of these is definitely no. Our definition of maintenance is multifaceted: The people who have built or who have been personally skilled and trained by those who built the units take care of them every 4 years. They are equipped with all of the technical knowledge, databases of individual unit history, experience, and equipment which is only available at the manufacturer or the manufacture’s service center. The same equipment and procedures are used as when the unit was originally built, the same tests as in production, the same very low tolerances, in all temperature ranges, under all possible conditions. This is something that simply cannot be accomplished with an in-the-field “function test” in uncontrolled environmental conditions, with common test equipment, and with non-factory-trained personnel.

The CYPRES maintenance is a powerful tool keeping the reliability of CYPRES in place – removing this tool would definitely result in a decrease in safety.

It would mean that all units would have to rely on the technical standard they had at the moment they were manufactured. We would have no further influence or possibility to adjust or update them, or to take care of them in any way. We would not be able to act in a pro-active manner – only reacting when something failed or went wrong. We would not even know the technical condition of the various generations of devices in the field with any statistical significance, because we would only see the units that someone thought had a problem of some sort. If something happened, we could only react and hope that it was a single isolated case.

How good is good ?

It is easy to claim that a product is so good that it will never have any problem, or that it never needs an update or adjustment. 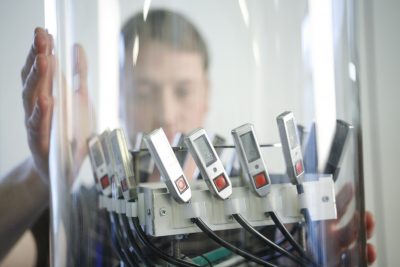 For this type of device, based on our research, knowledge, and over 15 years of experience*, such claims of never needing updates or adjustment are simply unrealistic.
If we were to make such claims, we would be stating that the device is just perfect from the very beginning, will always stay in this condition, and that there is nothing to control or adjust or improve. We cannot, – and are not willing to make such claims. It would mean that any updates or improvements would only go into new production units, or those returned for some specific reason – the majority of units in the field would be excluded, ultimately they would be out of date technically and have decreased reliability. 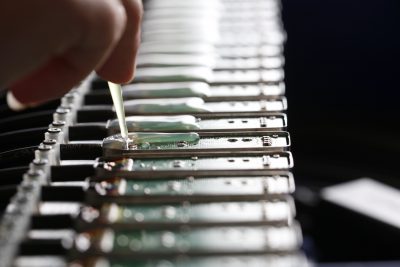 Electronics have a limited lifetime. It’s also referred to as MTBF (mean time between failure), and is a value which is much shorter than most electronics consumers expect. The fact is: electronics are less reliable, and more likely to quit working with age. Not all at the same time, or under identical conditions, but they will fail.
As a manufacturer who knows about these limits, you have choices. If your product is not critical (CD player, coffee machine, etc.) you don’t have to pay too much attention – the device quits working or becomes out of date, and your customer buys a new one.

However, if your product is critical in nature, there are a number of different approaches depending on how much the marketing department influences the technical department.

You could declare that there is no imposed lifetime limit, which would be a very popular statement with your customers, because most people equate “unlimited lifetime” to “will work forever”. You could also speak about “life expectancy”, a term which may or may not be based on or backed up by experience / statistics. You could leave the decision of how long to use this critical-function device up to the customer.

Use an AAD until it fails ? 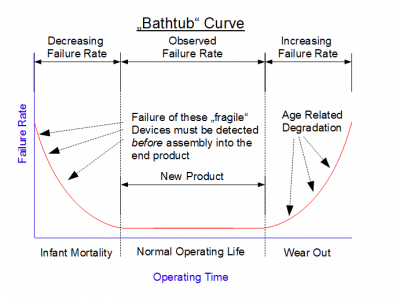 How would the customer decide? He could decide it is time to take it out of service when it does not start up or it reports that there is a problem during self-test (best case), when it quits working while operating (not so good), or when the device makes a completely wrong decision (worst case). But, this means that your customers would continue to use the device until it fails in some manner (depending on the failure mode, this might not be a desirable manner to determine lifetime). And there is another big hitch: if the self-test erroneously reports a positive result, how would your customer know that it should be serviced or replaced (before discovering it was not functioning during the worst of circumstances that is)? 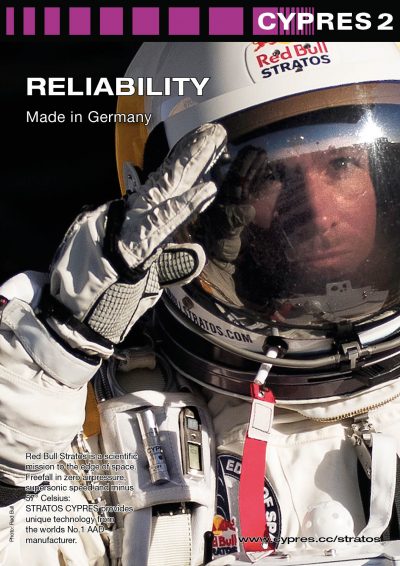 You can also be realistic and tell your customers what is required to make every unit produced as reliable as possible. Most likely this will not be quite as popular with the majority of your customers, as you would be limiting the lifetime to a specific, seemingly arbitrary timeframe, because you know that continued use will result in unacceptable risk. But, at the end of the day, your customers will appreciate it, even if it is unknowingly – both those few who are happy that it did its job as designed when needed, and also the vast majority of those who never had to experience the unpleasant consequences of unreliability.

These are some of the reasons for our philosophy and technical decisions. They have proven to work since 1991.

Helmut Cloth’s decision to design and produce an AAD that would be used by all skydivers has forever changed the parachuting landscape. A high sense of responsibility, combined with even more work is necessary to cope with the trust which is put in the CYPRES.
There is no reason for us to reduce our standards, and simply hope for a continued level of safety and reliability. CYPRES is a different kind of product, and is built and maintained by people with a different sort of mind-set.

P.S. – For those not aware of, or familiar about the background of service life for electronics (a topic not discussed in public every day), the Encyclopedia “Wikipedia” offers a lot of information. A good start into the topic can be found here: https://en.wikipedia.org/wiki/Service_life

*with reference to the first publication in 2006