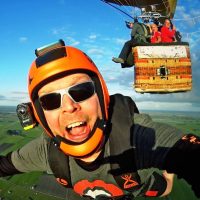 Here’s what you need to know about UK-based James “Macca” Macdonald: He gets all his information about America from a radio station in New York and he gets all his inspiration from two of his favorite tattoos: the rainbow-swaddled unicorn tattooed on his left shin and the jetpack-sporting kiwi on his calf.

Okay, that’s not true (though he does have the tattoos, and his predilection for NY 95.5 PLJ is motivated by a hard-earned good taste in radio). Indeed, there’s lots more you should know about Macca.

As it turns out, he’s just as interesting a human being as that previous information would imply, and more charming by half (an assertion with which pretty much everybody on the wingsuit scene would heartily agree). Macca has been a force of nature and a beloved presence in the wingsuit discipline for years. A longtime Phoenix-Fly Coach Examiner (and BPA Tandem Instructor, and coach in as many other disciplines as you can name), he’s been on the WS circuit since practically the dawn of the discipline.

Macca’s story doesn’t start in the sky, of course. One could, however, argue that it started in the air–the airwaves. Macca was born in a town in the southeastern UK, but he ran off to the big city to work in radio as soon as he could. The first of the big London radio stations he worked for was Capital FM. There, he served as the Assistant Producer for the Chris Tarrant Breakfast Show, which was, at the time, the biggest pop news radio show in Europe–in fact, one of the biggest in the world. When the host decided to retire, Macca went briefly into the film industry. He worked in Sound Sync and Audio QC a film post-production company called Technicolor. 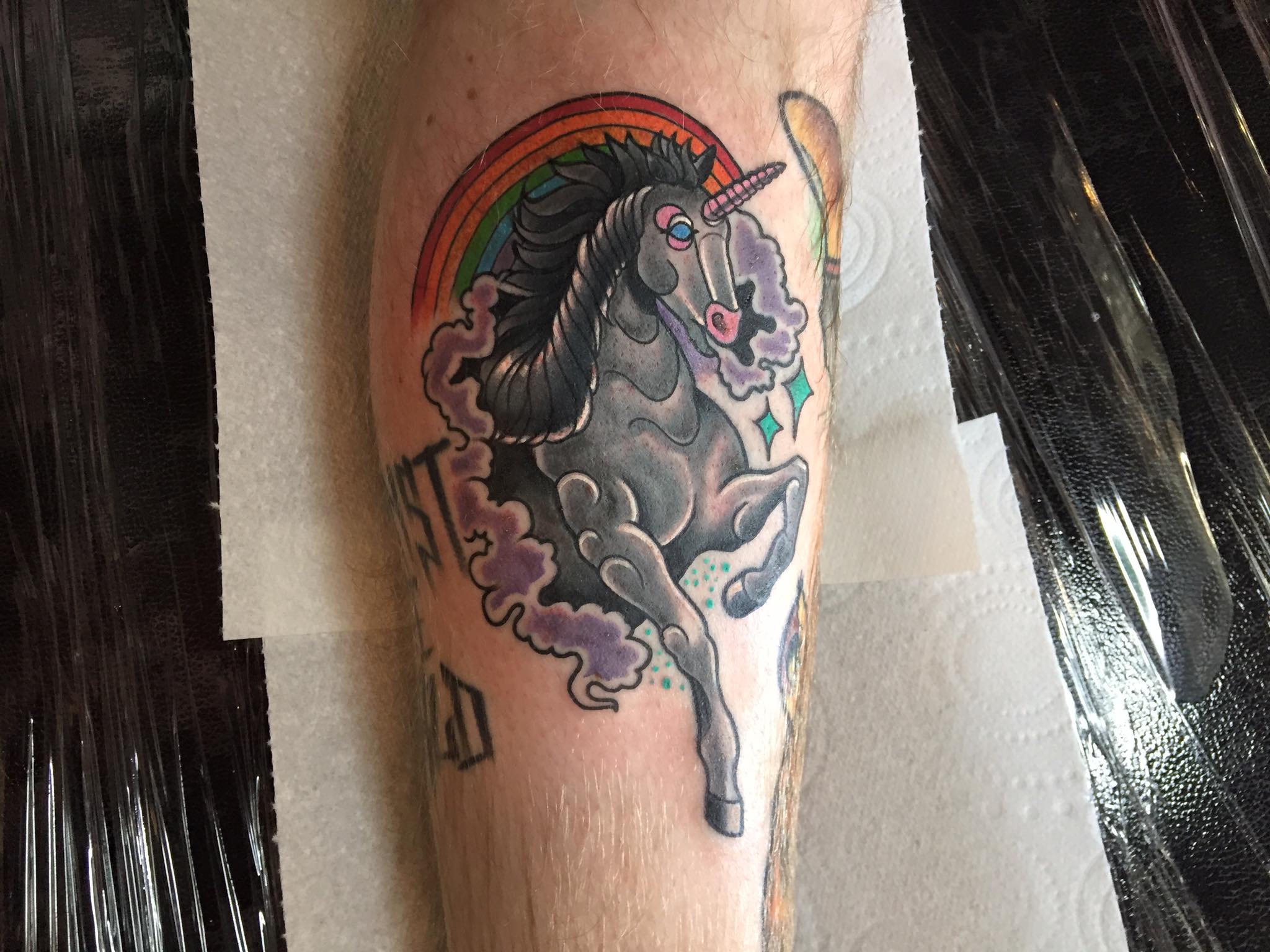 “I was doing what they call ‘restoration,’ mostly,” he remembers. “Back in the day–when things were filmed on real film–the audio was recorded separately from the picture, and they had to be put together. At night, the daily rushes would appear, the film would get developed and then we would have to clean up and sync the audio to the picture.”

It was interesting work, but it was night work–and Macca missed his beloved radio. He rushed back into the radio fold when he was offered a gig with a station called KISS 100. It was the big youth radio station at the time–number one in London for 15-24 year olds (“By the time I left, we were number one in London for 15-36 year olds.”)–and boasted even bigger numbers than behemoth Radio One.

“I was the Executive Producer and a Presenter of the Bam Bam Breakfast Show” he laughs, “Which was good fun for about 3 years, until our show got the largest fine ever in UK radio history. We all got fired. None of us have really worked in radio since.”

Luckily, he had an obsession waiting to fill the void that radio left in his life. As it turns out, right after that first radio job he’d run off to learn how to skydive at Florida’s, Skydive Sebastian; by the time of the mass firing, he was ready to make jumping his life’s work. It wasn’t a snap decision by any stretch. In fact, by the time the ‘radio’ chapter of Macca’s life had closed, he’d spent plenty of time in the sky. As is the British habit, he’d long been in the habit of taking long sabbaticals at warm American dropzones. 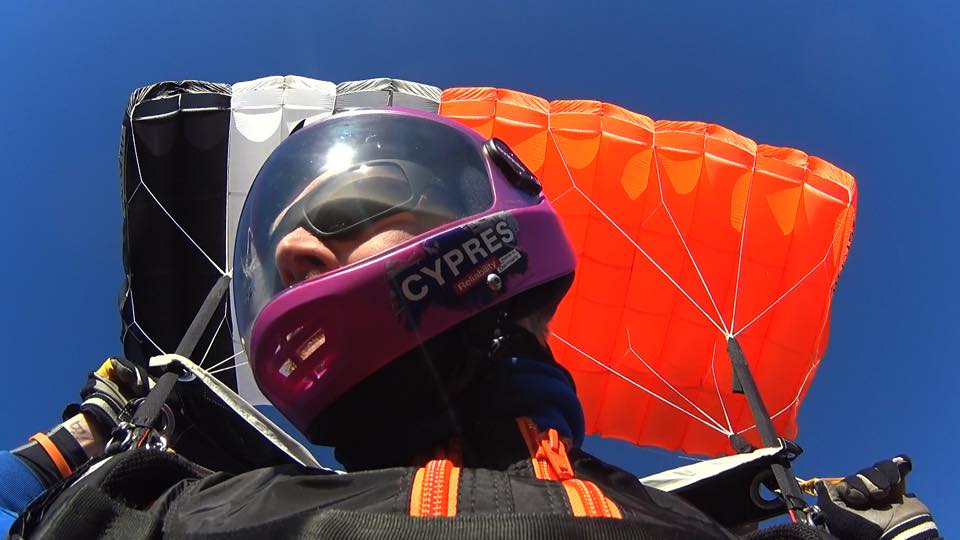 “I took lots of trips to the States,” he continues. “Back in the UK, I’d sit waiting for clouds, and the same spirit wasn’t quite there. For example: In the US, you can walk up to a manifest window when you hardly see anybody on the dropzone and they’ll still offer you a 10-minute call.”

There’s another thing, too: In those days as now, there was a lot of innovation pushing the sport forward on busy Florida dropzones. On one of those trips to Skydive Zephyrhills, Macca fortuitously made the acquaintance of Jari Kuosma, co-founder of the Birdman wingsuit brand with Robert Pecnik.

“You have to remember that this was way before you ever saw wingsuiting on YouTube,” Macca smiles. “I met Jari just as he and Robi were starting to do the whole wingsuit thing with Birdman–in the very early days. I saw what they were up to, and I was wowed. I had, like 70 jumps, at the time, but I knew that’s what I wanted to do. I stopped caring about the rest of it.”

At the time, Macca’s scant jump numbers kept him out of the game. When he approached Jari, he told the eager young jumper to hang in there; that he’d take him for his FJC when he was back in town with a longer logbook. Macca spent the intervening months diligently racking up those numbers and raced back to Z-Hills with the proof. The reward for his dedication was pretty epic: He ended up doing his 200th jump with the legendary Chuck Blue.

Let’s fast forward a few years. Then living in London, Macca was jumping down at the Headcorn dropzone in Kent. To put it mildly, Headcorn wasn’t big for wingsuiting.

“It was me and one other person, doing bits and pieces,” Macca explains. “The discipline was evolving, but really slowly.”

To level up, Macca ended up heading out to a different dropzone–Sibson, in Peterborough–for a wingsuit boogie with Loic Jean-Albert. There, he met Jude: now his wife and the mother of his little daughter, Ella. He fell in love with the vibe of the place, too, and Sibson has been Macca’s home dropzone ever since.

“Sibson was young; fresh; funky,” he grins. “It was more like America: bonfires, beers, all the really good stuff about skydiving.”

“The most lasting relationships of every kind in the sport,” he grins, “Are formed with beer and bonfires.” (In fact, Macca joined us as a CYPRES athlete many years ago in just such a setting.)

Macca is very keen on preserving the legacy of that beer and those bonfires, and he’s doing so in the face of odds he couldn’t have properly imagined back in those early days. The way Macca sees it, the tunnel has a place–but it has muscled its way onto the skydiving landscape in ways that are tangentially detrimental to the sport.

“The days of turning up after work on Friday afternoon, getting a couple of jumps in before sunset, beers, bonfire, then getting up early, jumping early, beers, bonfire, and then arriving to work on Monday broken…it’s gone,” he says. “Pre-tunnel, you would be at the dropzone all weekend. Less of that is happening now–because why would you spend your time sitting on a dropzone where you might only do two or three jumps all weekend when you could go to the tunnel on Saturday afternoon and get your fix?”

“The other important issue that we have here is that people are coming into the sport of skydiving with that ‘I am already brilliant at it’ attitude,” he insists. “To them, I would ask: Are you going to take a step back and look at these other aspects of the sports you are not brilliant at? You may well be head-down carving, but you are about to deploy a Navigator 220. New people in the sport aren’t mixing, or being looked after by the experienced jumpers like they used to. I want that cohesion back, and that comes from the social side of the sport. Beer fines [for first-time accomplishments] are a classic example: The beer fine brings people together to celebrate achievements and encourages the less experienced to interact with the experienced. Both sides can learn from each other.”

All that said, Macca isn’t totally anti-tunnel. When we talk to him, after all, he’s in the final stages of packing his bags for a trip to the new wingsuit wind tunnel in Sweden. “I do a lot of work with Phoenix Fly, of course, and we are heavily involved in the [wingsuit tunnel] project,” he explains. “I’m going out there to check it out and see what’s going on.”

“I always said that wingsuit flying is great because it’s the one discipline you can only get better at by jumping out of an aircraft,” he laughs. “This was inconceivable. But now we have a horizontally inclined wind tunnel. Huh. Shame on me.” 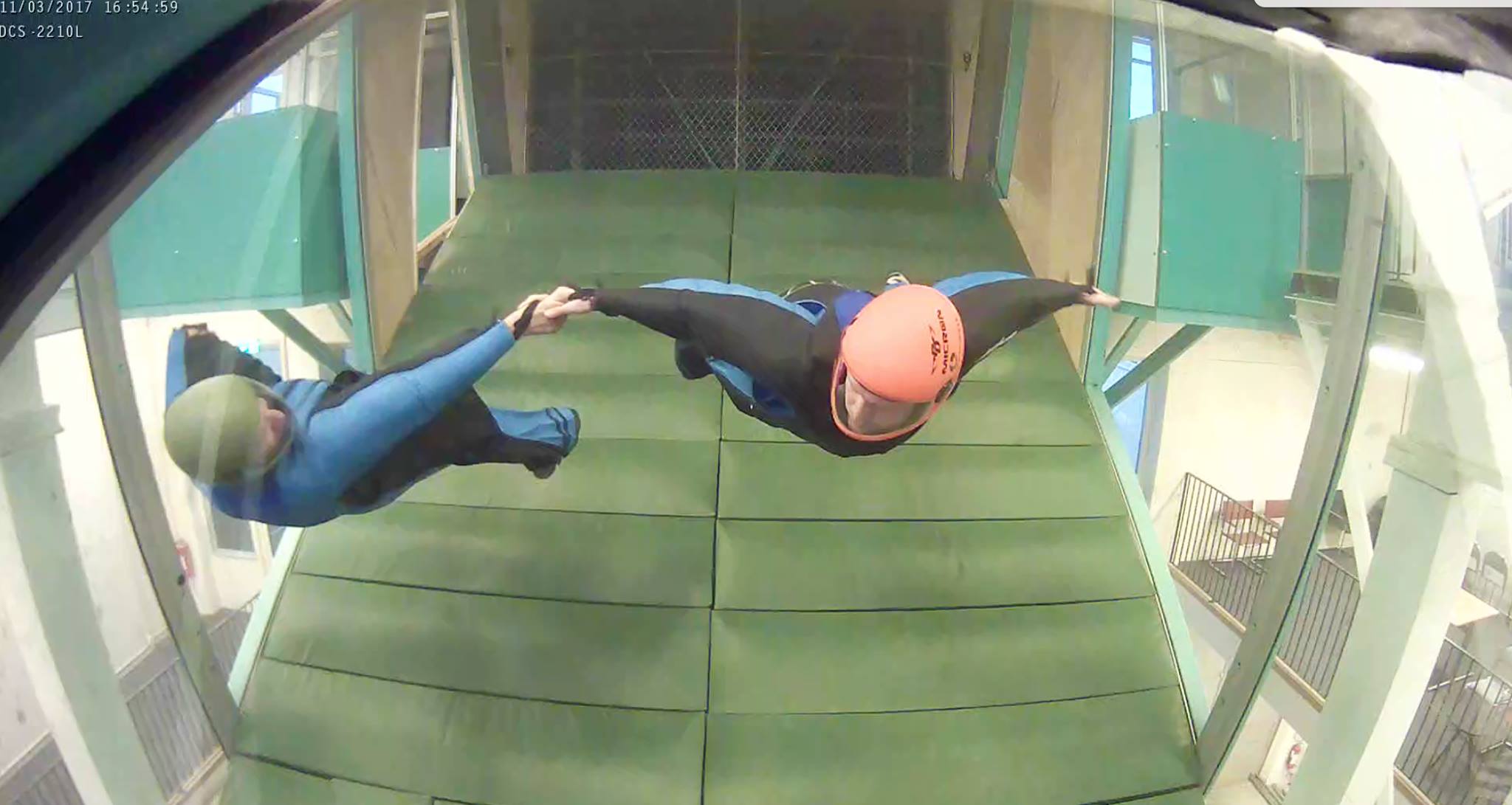 Existentially conflicted or no, Macca has his eye firmly on the larger mission.

“In all of this,” he says, “All I’m trying to do is keep that all-around education going in the sport; trying to make people aware of all the aspects they haven’t considered, but not in a condescending way. I do give talks and seminars and all that kind of thing, but I much prefer to be the approachable guy on the drop zone that people can come talk to. I like to try and educate–and perhaps enlighten–and give people the power to also do the same. Maybe then they’ll take that forward and look at the educational side of things and how can we improve the safety in our sport. There is no reason people should be getting hurt in our sport, and yet they do. What can we do together to mitigate that as much as possible? I don’t have all the answers, and I’m still learning; that’s why we need to share knowledge. The day we think we know it all, is the day to stop jumping.”

“That’s why I love CYPRES,” he enthuses. “It takes one of those lingering worries out so that you can focus more completely on the discipline you’re working on. Even when I wasn’t working with CYPRES, I would not have considered any of the other devices–because I know the history, the resources and the work that goes into each one of these things. I love my CYPRES. Seriously.”

Y’know what, Macca? We’re pretty darn fond of you, too.

CYPRES is proud to support James “Macca” Macdonald in his high-flying mission to make the skydiving world better, safer and more advanced.

All photos provided by James Macdonald.