When we talk to Rex Pemberton, he’s chatting to us from his house in California, set up in the serene foothills of the Sierra Nevada next door to Yosemite National Park. He lives on an airfield there — a little locus of aviation, where people’s houses are scattered around the airport, airplanes parked at their houses like alternate-universe SUVs.

“We do a  lot of skydiving literally right out of the airport, which is fun,” Rex grins. “It is very unique.”

Rex deserves any R&R he can get. A true adventurer, Rex has spent his life breaking world records across a wide swath of adventure sports: he’s the youngest Australian to climb Mt. Everest, for example, and he’s climbed the highest mountain on each of the seven continents. It was during this esteemed climbing career that he decided to take up skydiving. Now, with thousands of skydives, he regularly performs at airshows and, with the inception of the X-Wing Project, he’s bringing his antics up to a whole new level: basically, turning himself into a human/fighter-plane hybrid.

Over the past 12 months, Rex and his team have been working very hard to rebuild the jet engines for that beautiful blue wing. It has gotten bigger — moving from two to four engines, doubling the power in the system.

Rex is the first to admit that this jetman stuff is far from easy. Indeed, the wing has been an incredibly challenging and complex project. 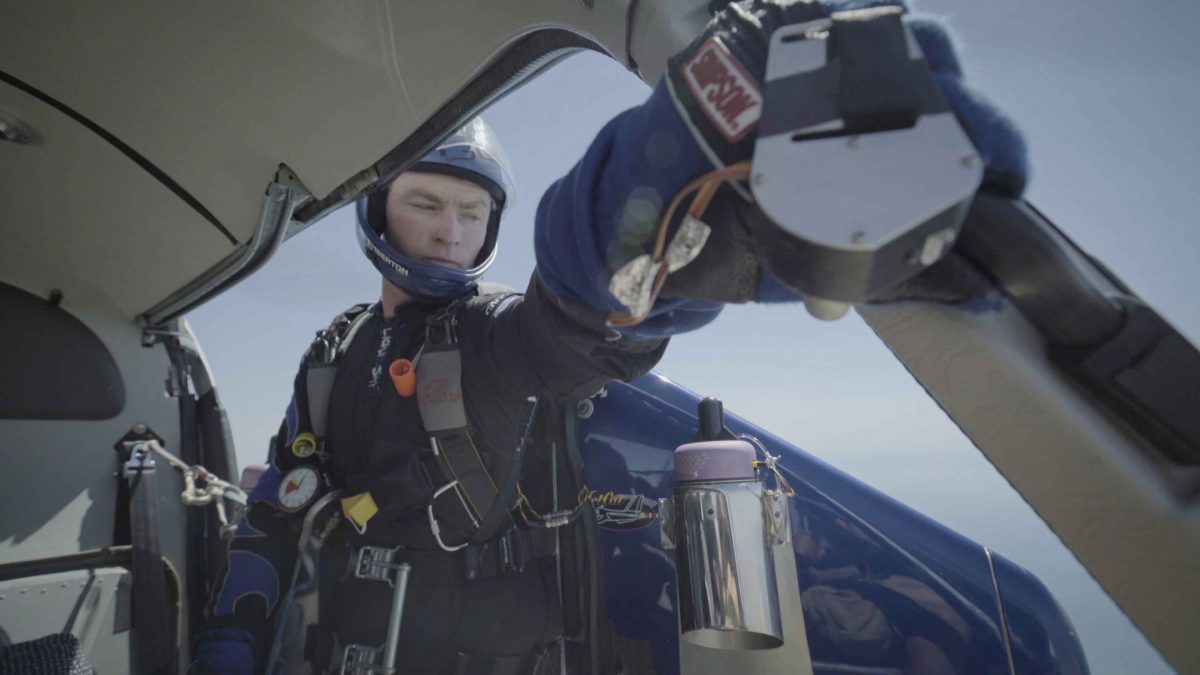 “One, because I’m managing a full-time job traveling all over the world with building, maintaining and innovating,” he explains, “in a realm that’s quite difficult because it’s combining the skydiving world — and the wingsuiting world — with the aviation world.”

Where those worlds collide, there’s a lot of paperwork. Behind the scenes, making the X-Wing a reality goes far beyond fabricating a carbon fiber wing and slapping a couple of jet engines on the bottom. According to Rex, that’s by far the easy part. The tricky part is the rules and regulations around it: because it’s a multi-engine jet aircraft, the FAA are very involved.

“The FAA doesn’t consider it a wingsuit anymore,” Rex says. “It’s an aircraft, so we have had to go through an enormous amount of paperwork and bureaucracy. How do you classify a jet wing? What type of aircraft is it? What sort of ratings do you need? The FAA came back and said I need a pilot certificate, a commercial certificate and a turbine rating. Realistically, some people may complain about having a pilot’s license, but there is no way in hell the FAA is going to let you get away with flying an aircraft that can sustain flight without one.”

“I’ve had to work with Washington on that,” he adds, “and that’s been really tricky because they don’t have any boxes to tick. [The X-Wing] doesn’t fall into any categories, so we created its own category, which has taken over two years.”

Finally, Rex and his team are in a place where he can actually fly the wing. It has a tail number and everything.

“A lot of people are probably thinking, why is Rex going so slowly?,” he laughs. “It’s because of those sort of issues. We haven’t been allowed to fly in the US up until now. It was a long process.”

There have been other challenges: namely, with the engines. The X-Wing incorporates tiny micro turbine jet engines that run at about 130,000 to 140,000 RPMs. For comparison: take a normal car, which redlines at 7,000 RPMs. The blades are turning incredibly quickly, and they are very small. The project had been having issues with those tiny little blades heating up, so the team had to completely rebuild the insides of the engines. As of our interview, that key rebuild had been completed — at significant cost, of course.

“We’ve been financing all of this with basic sponsorships: like CYPRES, a partnership for which we are incredibly grateful, and an engine product sponsor,” Rex says. “Everyone is putting in their time just on passion right now because they want to see the project succeed. Until we have large amounts of funding behind it, we’ll be limited with what we can do, how we can do it and the speed at which we can move.”

“It is all fun,” he quickly adds. “Don’t get me wrong. It is an amazing project! I love just being able to glide the wing, in much the same way as a wingsuit. It combines my passion for fixed wing aviation and for wingsuiting. It is an amazing feeling. I love being able to sit underneath the wing and have it flying you. I am definitely in control of it, but there’s no arm pressure. It is different to a wingsuit in the way that it flies — like an aircraft.”

These are memorable flights, one and all, to be sure — but Rex insists that, of all of those, the one he’ll never forget is the first time he was able to drop out of a helicopter and fly back to the helicopter he had dropped out of.

“A skydiver’s altimeter is normally going down,” he says, “even if it goes down slowly, with a wingsuit. It is always going down. So to have that come back up — and be able to climb 1,000 feet — was really amazing. It’s as close as you can come to flying a human body like an aircraft.  When the jets are working and everything is working fine, the wing is so well designed, it feels like it is on rails. You are literally as close as you can come to being a human Iron Man.”

With that in mind, the Marvel movies definitely downplay one key ingredient of becoming Iron Man: the fact that flinging yourself through the atmosphere like that doesn’t come without a hefty helping of mortal terror.

“Overcoming fear was a massive part of the initial testing,” Rex muses. “Having things go wrong and innovating around those things. Being able to think clearly and overcome those obstacles as they come up was really important. As with any new product, there were a couple of tests that really didn’t go so well.”

Luckily, those failed tests are far in the past. It feels like smooth sailing for Rex now — and he has the videos to prove it.

“When I fall off the chopper, I get the same sense of freefall that we all do in skydiving,” he grins, “and then when I plane out of the initial dive and start spooling up the engines to full RPM, it feels like there is just like someone reaching down and picking me up and pulling me through the sky. I really feel the wing.”

The first time Rex dialed it in and the engines were running right was after a lot of pretty hairy test jumps. The team actually had trouble editing video for that flight: Rex had been maxing out the microphone by having a good yell.

These days, Rex is excited to report that he and the team are close to some truly breakthrough flights. They have a USA national wide TV show very interested in featuring the project. It’s slated to come to a screen near you in 2020.

Rex, you can bet that your supporters here at CYPRES will be watching. We couldn’t be prouder to support such a brilliant effort in human flight.