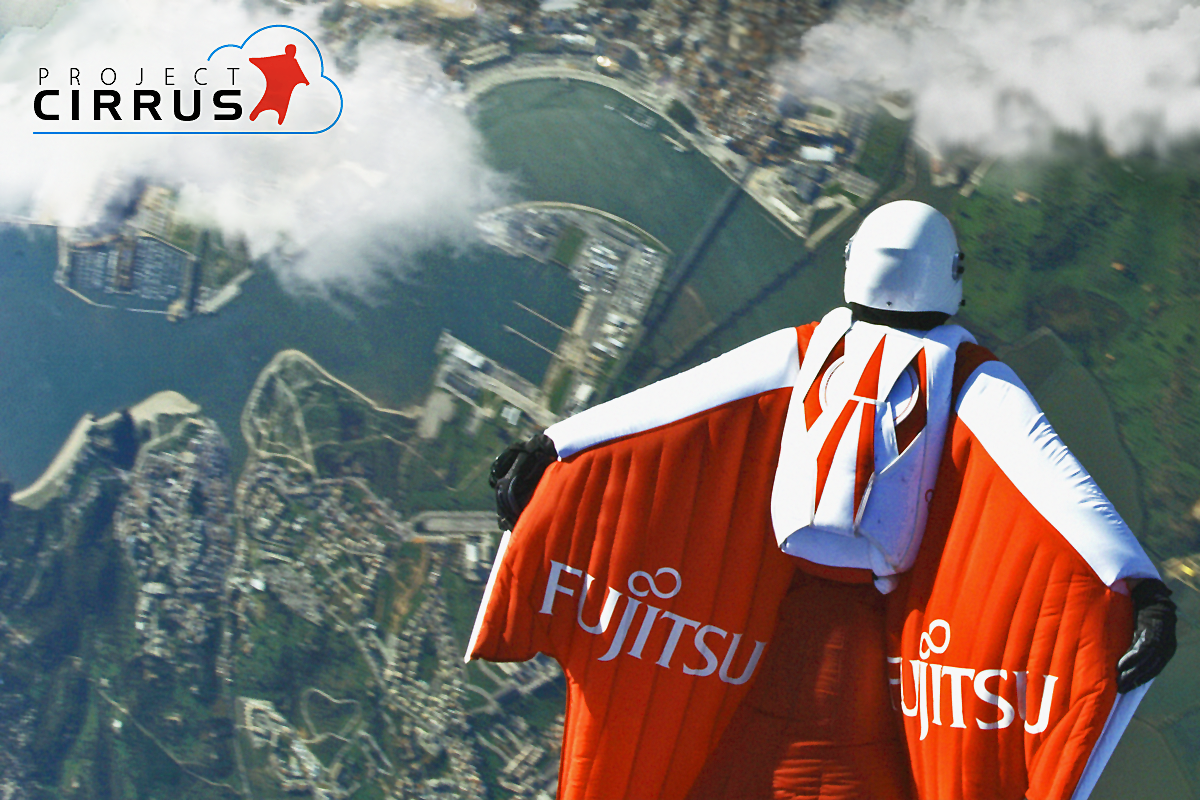 To manage the brutal cold–minus 50 to minus 70 degrees Centigrade–Fraser will be wearing five low-density, high-insulating merino wool layers and Stormchaser gloves from Outdoor Research, which will deliver battery-powered heat to Fraser’s hands for the duration of the event.

Fraser Corsan started flying wingsuits back in 2001. At the time, he was one of the 15 athletes around the world to be flying one.

“At the time,” Fraser remembers, “People were looking at it and thinking: this is wacky and a bit scary. But it was the first time we actually truly felt like we were flying. I was hooked–really–and I haven’t stopped since.” 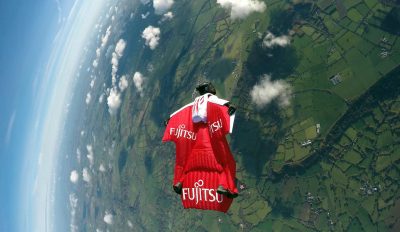 cool.” He grins. “But I always wanted to get higher. Now I am, and for a great cause.”

Fraser’s day job was test evaluation for the military in the UK–with a specialization, naturally, in aviation safety. “I used to look after the Typhoon Eurofighter fast jet; I was lead for all UK safety for the aircraft,” he explains, “Then, I did the safety for the BBMF historic aircraft flight of the Royal Air Force–including [Supermarine] Spitfires [a British single-seat fighter aircraft that was used in WWII] and [Hawker] Hurricanes [a British single-seat fighter aircraft of the 1930s-1940s].”

With such a super-cool day job, it’s no wonder that Fraser’s concept of what’s possible is a little more forward-thinking than the average Joe. “I’ve done half marathons and marathons for charities I care about before,” Fraser says, “But I decided that I wanted to give more back. Much more. I had an idea to do a jump which catches people’s imagination and really pushes the limits–and when I started approaching people about it, it became apparent that it was going to happen.” 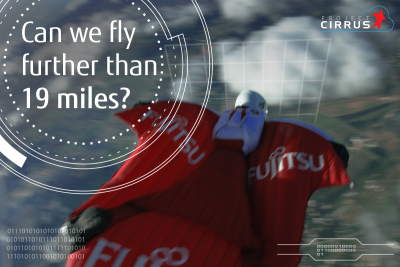 “I always wanted to do something in skydiving that did some realgood for the world,” Fraser says. “I immediately thought of SSAFA, which I’ve supported before. It’s the oldest charity in the UK for the armed forces and they regularly change people’s lives for the better. But they go about it very quietly–they are very humble about what they do–and therefore, they’re not terribly well-known on the streets, so to speak. People over here understand other charities, but the work SSAFA do is not as visible to the public. But I’m passionate to help raise SSAFA’s profile–as well as lots of financial support–for their great work. This jump is the means.” In May of 2017, Fraser and his team are going to break four wingsuit world records and raise as much as possible for the organization–strong support indeed.

As you might imagine, there’s a bunch of technology involved in the feat of jumping a wingsuit from about 8,000 feet above normal commercial cruising altitude. “From the outside,” Fraser grins, “This stunt looks crazy. But what’s really important for people to understand is that this is a really long, really incremental journey. It is not a case of waking up one day and saying, okay, let’s go do this. It’s a massive team effort, and we’ve studied every single scenario and every bit of kit.”

The packing list reads like a gearhead fantasy novel. First of all: Fraser’s wingsuit itself sports an 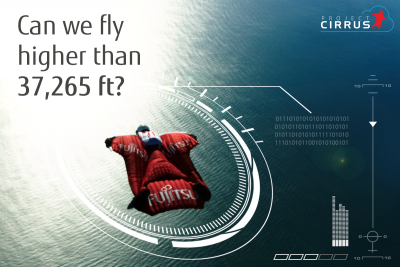 optimized wing profile with a leading edge built of high-density foam. Blades confer additional stability at high speed, and plenty of rigid inlets support full, decisive pressurization. His container system, Sunpath’s Aurora, is wingsuit-specific, and will increase his flight performance by 2 or 3%. On a normal wingsuit jump, that wouldn’t count for much–but when you’re flying over 20 miles and 40,000 feet, it makes quite a noticeable difference. Fraser’s canopy is an ATAIR  WinX, designed specifically for wingsuit flying. “At the end, when my arms are hanging out of their sockets,” Fraser laughs, “It means that I can be happy that the deployment is going to be very clean. I won’t be fighting line twists.”

When Fraser deploys–and, in fact, for every moment of his flight through a 25-mile-long, five-mile-wide corridor of class-A airspace–his team will know exactly where he is. He’ll be wearing a transmitting system which will transmit his live data feed back to the aircraft. From there, it’ll be relayed down to his ground crew (who will be looking at the live links, because the event will be live-streamed. On top of that, he’ll be sporting a GPS system which connects him directly to another team on the ground. That team will track Fraser in real time to find him when he lands.

To manage the brutal cold–minus 50 to minus 70 degrees Centigrade–Fraser will be wearing five low-density, high-insulating merino wool layers and Stormchaser gloves from Outdoor Research, which will deliver battery-powered heat to Fraser’s hands for the duration of the event.

“I went into the last jump at 30,000 feet with really good Gore-tex gloves,” Fraser recalls, “And I had to physically look out and check that my hands were still working. I could see them, but I couldn’t feel them beyond the wrist. It worked out–muscle memory takes over, and you do what you have to do–but we knew we needed to optimize that aspect.” 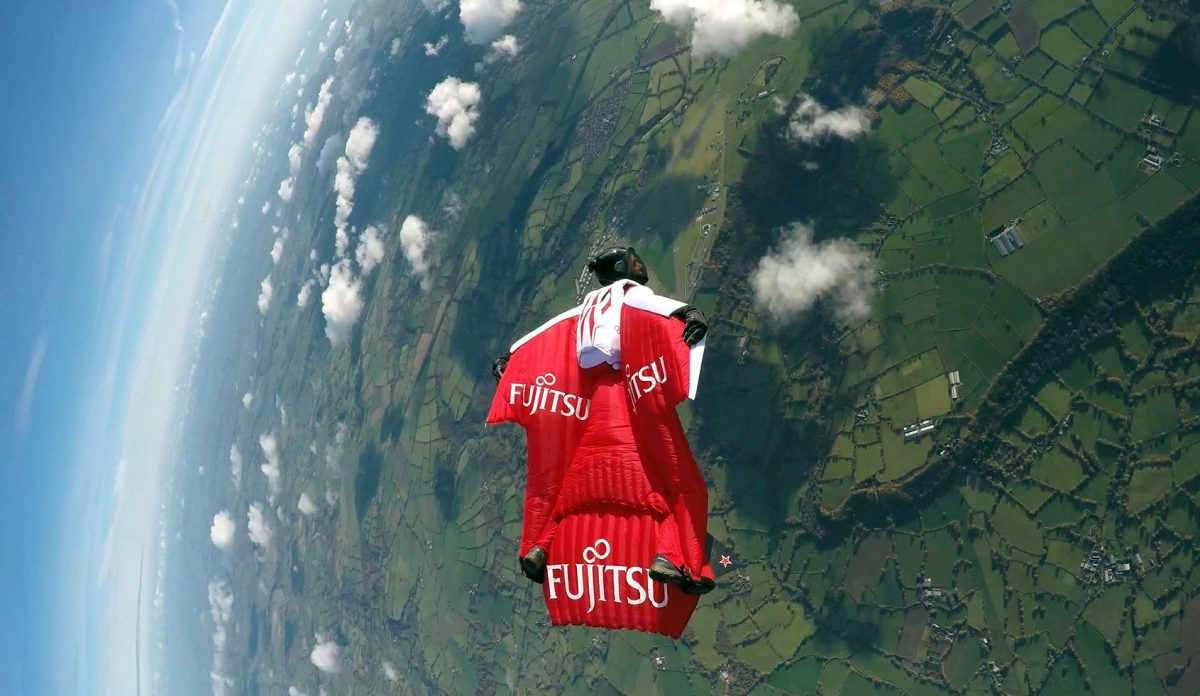 Then, of course, there’s oxygen. At 40,000 feet, you’re taking your own. “We’re using a system from Cobham Mission Systems, which provides civil and military airspace solutions.  They have a division which specializes in high-altitude parachuting. They are being really cool and supportive, and they’re lending us a series of equipment which includes an on-board oxygen console, mask, bailout bottle and support experts.”

Fraser will be breathing 100% oxygen for an hour on the ground before the event, then switch to a bailout bottle just before he exits the aircraft. The bailout bottle is a feather-light carbon fiber composite and holds about 45 minutes’ worth of oxygen. With no space to spare inside the suit, the bottle will be mounted to the side of Fraser’s container system. The hose will be routed over the yoke of Fraser’s container, avoiding the risers obviously, then travel along his chest strap to a regulator. That regulator will step the oxygen down from 6,000 PSI to a pressure that Fraser can breathe. The depressurized oxygen will then move along to Fraser’s mask–a special oxygen mask, specialized for use at altitude, which fits into an integrated system that he’s co-developing with Bonehead.

“One of the issues that has cropped up previously regarding masks is that, when you’re skydiving, the moisture from your respiration can pool in your exhaust valve. When you go from being in an upright sitting position in the plane into a wingsuit flight, the fluid can spill forward, hit the exhaust valve and form a nice icy block, which means you then can’t breathe out. We have resolved that,” he notes, “With a heating and venting system. It’s equipment like this, along with several backup plans and fail safes, that make this record possible–and that’s great, because I quite like my life.” 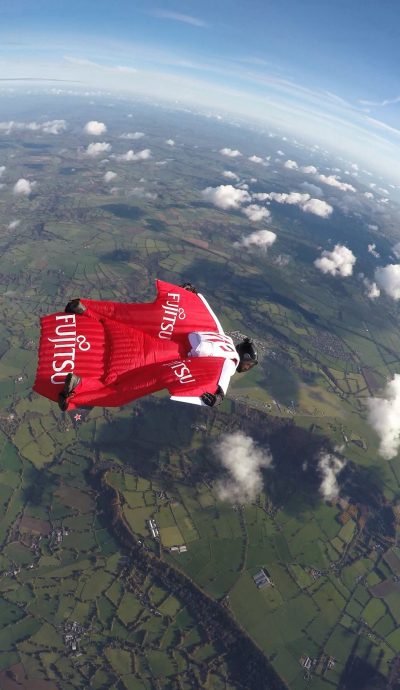 Speaking of that cornerstone desire to survive the event–Fraser is proud (and relieved) to be using a specially designed Wingsuit CYPRES. Fraser has never experienced an AAD fire in all his thousands of jumps–but if this one happens to be the one, he’ll be ready.

“Jens [Gosmann] and the rest of the team at Airtec have just been really cool. They’re providing me with a wingsuit AAD that they’ve modified to function well above our target altitude. It’s in line with a military AAD–which goes to 65,000 feet–but they’ve built me a hybrid which will keep me safe in a wingsuit environment.”

“If you look at how many saves that have been made by CYPRES and the reliability of their kit, it is a no-brainer to be working with them–and they’ve really stepped up and helped with this project enormously.”

When he thinks about all the stars that have aligned to make this event possible, he’s awash in gratitude. “I’m lucky,” he continues. “I have been in the right place at the right time.”

Airtec is proud to have been in the right place at the right time to support Fraser Corsan’s incredibly brave, noble effort on the behalf of SSAFA.

If people wish to find out more about the project–and help support the amazing work SSAFA do–they’re invited to visit www.projectcirrus.com. The project is fully sponsored already by Fujitsu, so 100% of every donation goes directly to the charity. Fraser provides an inside view on the project from Twitter @frasercorsan.