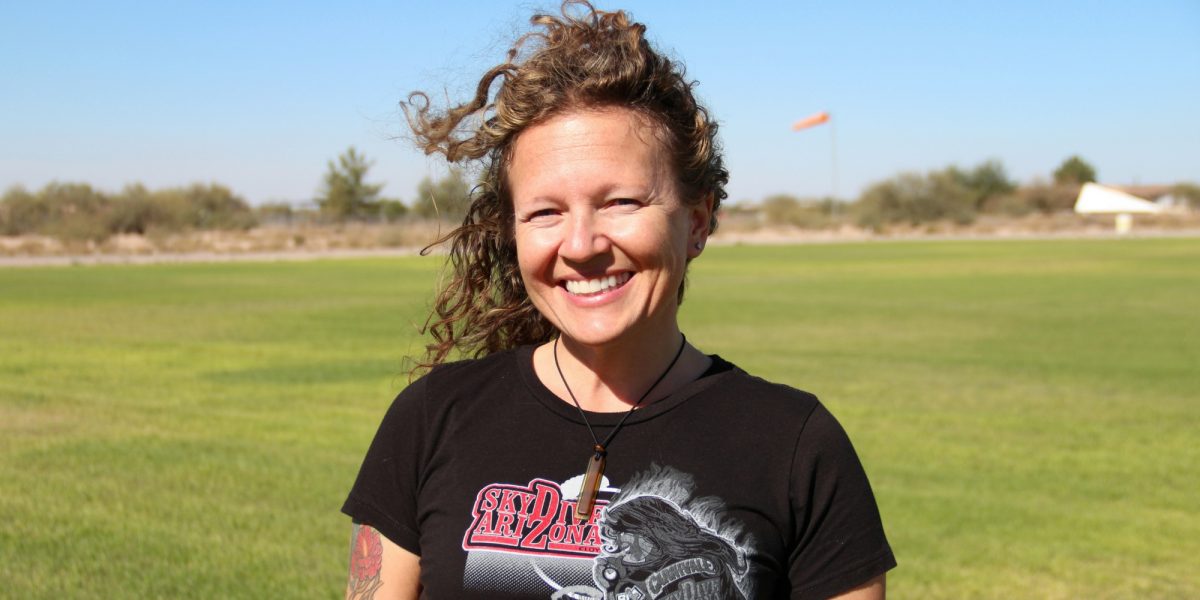 When people talk about Melissa Nelson Lowe, you can hear it in their voices: They’re talking about a force of nature.

In the well-over-10,000 jumps that Melissa has logged, she has bagged 18 world records across three disciplines, instructed hundreds of AFF students, co-created four-way VFS, picked up a gallery of Nationals medals–and been at our side as a CYPRES athlete since 2002. In addition to her superstar life in the sky, Melissa wrote a very successful book about her larger-than-life father, Roger Nelson, a skydiving icon–and she’s currently following it up with a second volume, which is just about to hit the shelves.

Melissa was gracious enough to take a few minutes to chat–between unpacking a newly-moved house and shuttling around her very active toddler–about life, love and the red rocks of Moab. (Spoiler: Her life has not slowed down.) 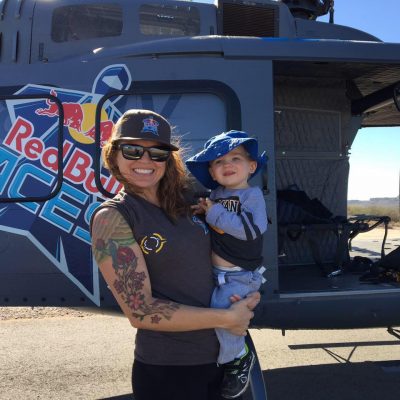 CYPRES: You’re unpacking moving boxes again, it sounds like! Where are you now?

Melissa: We just moved near the south side of Moab [Utah]. My husband, Ben [Lowe], has been coming here to BASE jump and climb for seven or eight years now. He fell in love with it at first sight. Since he first started coming out here, his dream has been to buy property in Moab and move in. This isn’t the first time we’ve been here–we lived here together in 2012 and 2013, and even got married here–but things didn’t work out as planned. So we did a little walkabout, if you will, until we felt like it was time to return. After a while, we realized that we wanted to do whatever it took to get us back here, because this is where we’re happiest. And we did.

CYPRES: You and Ben seem like a modern fairy tale: two skydiving legends and their rambunctious little kid. What’s your story?

Melissa: I first saw Ben at my family’s dropzone–Skydive Chicago–even though I was living and working in Hawaii at the time and he was actually right where we are now, living and working in Moab. I was doing a big world record camp, and I had my usual packed schedule to contend with. This was during SummerFest [Skydive Chicago’s massive midsummer blowout boogie], and Ben was out there doing tandems just because it gets crazy-busy. The dropzone had invited him as an extra instructor to help contend with the extra workload, so he came out for the week.

So: At one point during the camp, I was hanging out with the girls and saw him walk across the hangar. I was, like, ladies–I need stats on this guy. Immediately. It was so out-of-character for me. All of a sudden I was a teenage girl again. I wanted to know everything about him. I couldn’t talk to him without sounding like an idiot. I literally couldn’t form complete sentences. I would twirl my hair with my finger when I talked to him. It was unbelievable. My girlfriends’ jaws were on the floor. I then did what anybody else would do in my situation–I stalked him on Facebook. 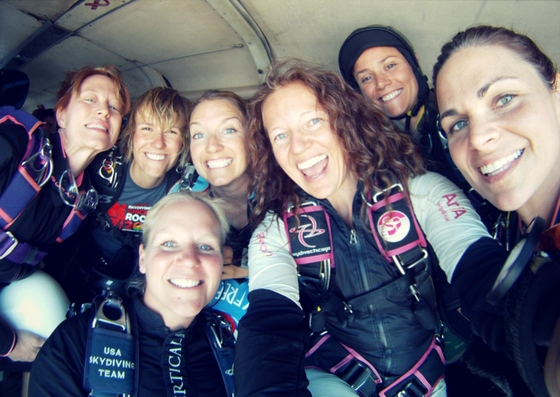 Cut to a few months later, when I showed up to his home dropzone in Moab because I had a gig organizing the [M.O.A.B.] boogie. After a little while of going back and forth, I finally broke down and said, “Just so you know, I have a crush on you. I don’t know how else to say it.”

We totally hit it off. Come to find out, he didn’t know anything about me. He didn’t know anything about my family history in the sport–and for me, that was incredibly refreshing. He got to know me for me, and not judge me based on my background. Right after that, I invited him to come back to Hawaii with me, and he did. It just clicked. And it wasn’t long after that when I was, like, “I want to get married and have your babies.” And he was, like, “Okay.” I could have totally scared him away by saying those things, but he was incredibly cool. He was, like, “Sure, sounds good.” We’ve been together ever since.

So: I stalked him and told him I would have his babies. That was my pickup strategy. I could have gotten a restraining order, but I got a marriage instead. [She laughs.] And then a kid. It’s been full-on. I mean: The other day, before I picked my boy up at school, I sat down on the couch with my feet up for five minutes–probably, exactly five minutes–just to absorb everything that’s been going on, because when you become a parent, there’s no such thing as relaxing.

CYPRES: Have you ever been a “relaxer”? Your life is a constant parade of athletic and personal achievements, it seems like.

Melissa: I suffer from depression, and one of the things I recently discovered about myself is that working really, really hard is one of the tools I use to control it. When I’m moving and doing stuff–when I’m active–I’m happier. Goal orientation is a bigger-picture thing for me than for, I guess, “normal” people, who reach a big goal and move on to something else; maybe, out of the sport. Striving for the next thing is an essential thread in my daily life.

It’s not just about the records. For instance: Even though I’ve published the book, it doesn’t mean I’m done. I have to look beyond the goal, because, for my health and well-being, I still have to continue to fill my time. That’s another thing I love about my husband: He completely supports that, and he helps me brainstorm the next goals I’m setting up for myself. 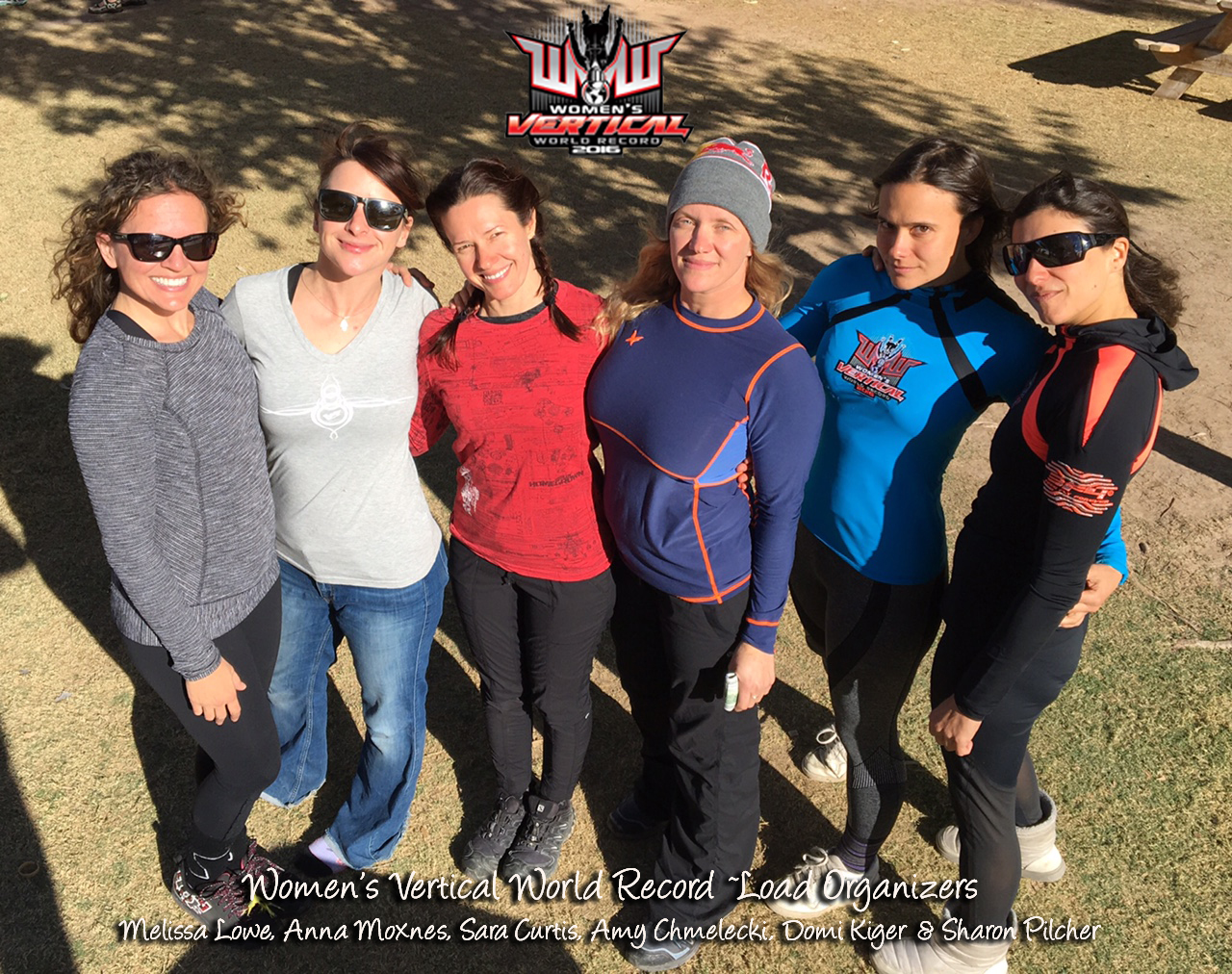 CYPRES: Speaking of your books: They’re both incredibly honest and forthright about the very complicated family situation you grew up in. How has the second book been different for you than the first?

Melissa: When I started working on my dad’s manuscript for the first book, it was basically therapy for me, because I didn’t know about a lot of the stuff that went on around me during my childhood…even though we had police knocking on our door ever since I can remember. I understood that there was a serious undertone to those visits, but I couldn’t fully comprehend it for years.

As I got older, I started understanding that it was drugs, but here’s the weird thing: this stuff was such a part of my everyday life that I didn’t see what was wrong with it. I knew that it had to do with some sort of ambiguous law saying that drugs were illegal. So it was really hard to, as I was coming of age, also wrap my head around why the police and government officials were all over my dad’s case. And where he was, too; some Christmases, he would show up late or not at all. Mom would just say he was working.

Even though I had a lot of dark periods of my life growing up, I also had a lot of light periods, when my dad bro 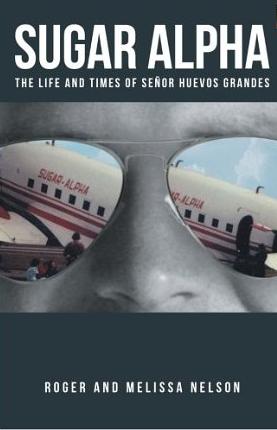 ught a lot of joy and fun–not just for me but for the whole skydiving world. That contrast meant that I was conflicted a lot. So book number one charts my process of learning exactly what happened; starting to resolve that conflict within myself.

Publishing that book was one of those bright-light moments when everything just kind of settled into place and made sense. I was finally able to experience peace. I was able to see that my dad’s behavior was a tool for him, in much the same way that keeping moving is a tool for me. My dad lost his brother in 1979 to a skydiving accident, and he had no idea how to exist without him, because they were best friends. [The trafficking lifestyle] served as a coping mechanism. My father needed the adrenaline and excitement and adventure, but he was conflicted because he also really wanted to be home with us kids. He just didn’t know how to make it all work.

Once I arrived at that still place within myself, I was able to really work on the book project. About that time, Ben came into my life, and he knew that completing it was a major goal of mine. So he would take me off the DZ, drive me to a Starbucks and support me to sit and be quiet and work on the book, because he knew I couldn’t focus while I was on the dropzone. He would take me away from that environment so I could do the work, and that’s pretty much how I finished the book.

So then the second book came along. It’s interesting because here I did this first whole book, and I had this huge self-empowerment growth feeling; this process-complete feeling. And book number two kicks off, and it was like starting all over again; all the dark, ugly, awful feelings came back in a rush.  I was, like, “Wait a second. I thought I worked through this!” All the old feelings were suddenly back in full force–but I realized that now, I have the tools to process them and move forward. So I use those tools.

CYPRES:  What a journey. How has your relationship with yourself evolved, now that so much of the hidden challenges of your past are out in the open? Now that these stories aren’t the stuff of gossip anymore? 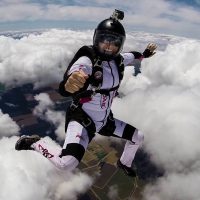 Melissa: Yeah, a lot of people made assumptions about what happened back then. I feel, in some ways, safer now that it’s all in book form, like: “Okay, here you go, if you really want to know. This is how I grew up.” A lot of people were under the impression that my childhood was really glamorous and adventurous–that it must have been so much fun. Not a lot of people realize that there was a lot of darkness in our life; of wondering if the government was going to show up one day and take our car or house or both.

But now, y’know what? I can honestly say I’m a happier person for having written these books. In my younger days, I coped with drugs and alcohol; now that I have been sober for quite some time, and after having worked through this stuff with the writing, I can see and celebrate how fortunate I am. I’m through all the trauma.

Even though my dad was insane, he definitely paved a way for my brother and I in this sport, and I feel an incredible amount of gratitude for that. He had so many flaws–and some will always make me sad; will always hurt–but I can see what he has given me, and I am grateful.

I have a mad amount of respect for him, because he lived life outside the scope of the “normal.” As far as I’m concerned, that’s a privilege, because a lot of people don’t get to even see outside the box.

I’m so thankful for this life; for all of it. Every time I come down from a skydive, you can see I’m all smiles, no matter what happened on the jump, because I am constantly amazed that this–this!–is what I get to do. This story is still being written, and I’m so glad it’s mine.

CYPRES is proud to support Melissa Nelson Lowe.
To learn more about the Sugar Alpha series, check out her blog at sugaralpha.wordpress.com