The second edition of a new skills-camp-dimension, made in Germany

In August 2018, Germany´s first combined EXPLORE Sky´n´Tunnel Skillcamp took place at Skydive Soest and Indoor Skydiving Bottrop. The camp was a blast! (Link #1 at the bottom of this article) And the great success of this very new concept required a second edition in 2019, with even more participants, more caoches and the best weather you could hope for.
The coaches in 2019 were CYPRES sponsored athlete and freestyle world champion Will Penny, Skydive Soest’s local hero Sebastian Igel, and Boris Gaykovich, a great coach from Flystation St. Petersburg – so again, a high class international coach team was making sure that this second edition would be even greater than the first!
Here’s the recap of one of the female paricipants, Laura Meier:

On Monday 19 August 2019, the EXPLORE Skill Camp started in the tunnel in Bottrop.

Coaches and participants traveled to Bottrop from Barcelona, St. Petersburg, Leipzig, Münster, Hamburg and many other cities. Before the first session started at 15:30, we had enough time to plan and brief the groups. Already during the allocation of the groups to the respective coaches, the individual strengths and goals were considered. So Boris took over the static flying and Will the dynamic flying in the first place. Not only tunnel time was shared, but also cake and pizza.

On Tuesday, with lovely weather, the group organization for jumping started exactly at 08:00 AM.

From then, there was only one speed for all participants and coaches up to Saturday evening: FULL SPEED!

Like in the tunnel, the daily division was based on skill levels, individual abililties and and preferences. In most cases there was a permanent core of the particular groups. In rare occasions, small adjustments were done, in order to make everyone feel happy in his/her group. Jumping was done in three or four plus one-groups.
The coaches rotated groups daily to give each participant the opportunity to fly with each coach and the average number of jumps was 6-7 jumps per day. Despite packing and the usual lunch break, everyone made the best of themselves and the jumps. Briefing and debriefing were also very important and were held at all times. That’s the crucial difference between a skill camp and a boogie: Every participant is given a detailed briefing, constructive tips and support for each and every jump. So actually every jump is an improvement on the previous one. 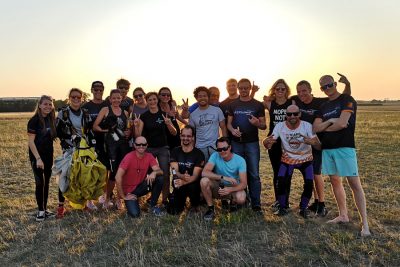 On Saturday evening, after the sunset load,

we had a barbecue and a drink together and as a highlight, watched the aftermovie (created by Sven Jaspers). We partied until deep into the night, had fun and shared stories. I dare to say that every single attendee got his money’s worth, learned a lot and left the camp with a big smile on his face.

Special thanks go to Andreas Riekes, who brought the camp to life. I take my hat off to his efforts as well as all the hard work and dedication he has put into this event. A great thank you to Sebastian Igel, Boris Gaykovich and Will Penny for the great jumps, thanks to the Skydive Soest crew and thanks to all participants who made this event so unforgettable. See you next year, I am looking forward to it! 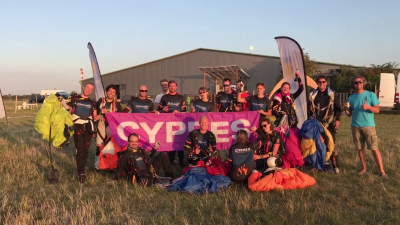 In 2020, there will of course be a next edition. And also a “light” version. The camps are already fully booked and CYPRES is happy to support this unique skill camp dimension again.

#1: Introduction of the first edition in our blog