Above photo by Hayden Galvin

closed your eyes and daydreamed of jumping into exotic places, flying your parachutes above history looking below on the majestic and powerful views? A freefly team we’ve fallen in love with is doing just that – with purpose, art, and passion. Meet the incredible duo who make up the World Champion Freefly team from France, Team Airwax with Karine Joly and Greg Crozier.

Karine Joly, from Lyon, France, is a woman who wears a beautiful smile and has a sparkle in her eye when it comes to living her dreams. Karine has always been fascinated by the sky. She remembers when she was younger that she’d travel around with her parents and her face would be glued to the window while she stared at the magnificence of the moving sky. “It felt like the sky was my home, above the world, in the clouds,” Karine shared.

Greg Crozier from Saint Etienne, France, equally wears a compassionate smile and looks back to recall seeing parachutes in the sky at the tender age of seven. His dad was a leisure airplane pilot and they once landed at a dropzone to have lunch. Seeing the canopies float down was fascinating to his young mind, but it wasn’t until four years later that something shifted. A passion for skydiving was realized when he was eleven years old. He said, “Thanks to the awesome Hollywood movies featuring skydiving scenes. Point Break was definitely the one that made me realize that skydiving could be a part of my life!”

Karine thought back and said she always liked the sensation of speed. It wasn’t until she turned 18 that her godmother gifted her with her first tandem skydive. “It was a complete revelation to me! When I landed I told my parents, this is what I want to do!” Her parents, however, encouraged her to complete her studies and then she could do what she wanted afterwards. She didn’t waste a second. After finishing design school in Paris, she had saved enough money and learned how to skydive.

Four years after her 18th birthday Karine went to her first static line jump at Skydive El Pason in New Mexico with friends who lived close. “This remains the best time of my life so far,” she exclaimed. “I loved the fact that we had to climb out and hang from the wing! I felt like a stunt woman in a movie!” All of Karine’s friends who joined her became fast friends and had such a life-changing experience.

In a world far away Greg made his first static line jump in St. Galmier in France. “I went with my best friend, Fred who now lives in South Africa,” Greg began. St. Galmier is a small, but busy Cessna 185 DZ. Greg was in karate for many years and knew that practicing was one key to success. So he would practice jumping from an aircraft mockup to with a mattress placed at a 45° angle to simulate his exits. “I’d practice hundreds of times before I actually jumped.”

Greg continued, “The first experience could not have been more intense. The Cessna door flung open, as it’s meant to do, and the wind engulfed the airplane cabin. I was on my own with an instructor sitting beside me, and seconds later I was climbing out and letting go of the plane.”

while on a Pilatus Porter at Skydive Lyon in France. “We became life partners years after that,” Karine shared. They began training together and they never looked back. “For me, it is a great strength to be working together and being together on the team. It’s not always easy, but we compliment each other well and that is our biggest asset!”

Greg added, “Working together in the beginning was hard for many reasons. Our weight and body shapes effected how we flew together. When you train and compete with your partner, you definitely spend all of your time together. That situation pushes you to create boundaries outside of skydiving so it doesn’t interfere with your relationship. However, after three years, all of these details are fixed and our weaknesses or differences have become our strength. It has become way easier and better to be a couple to train and compete.” 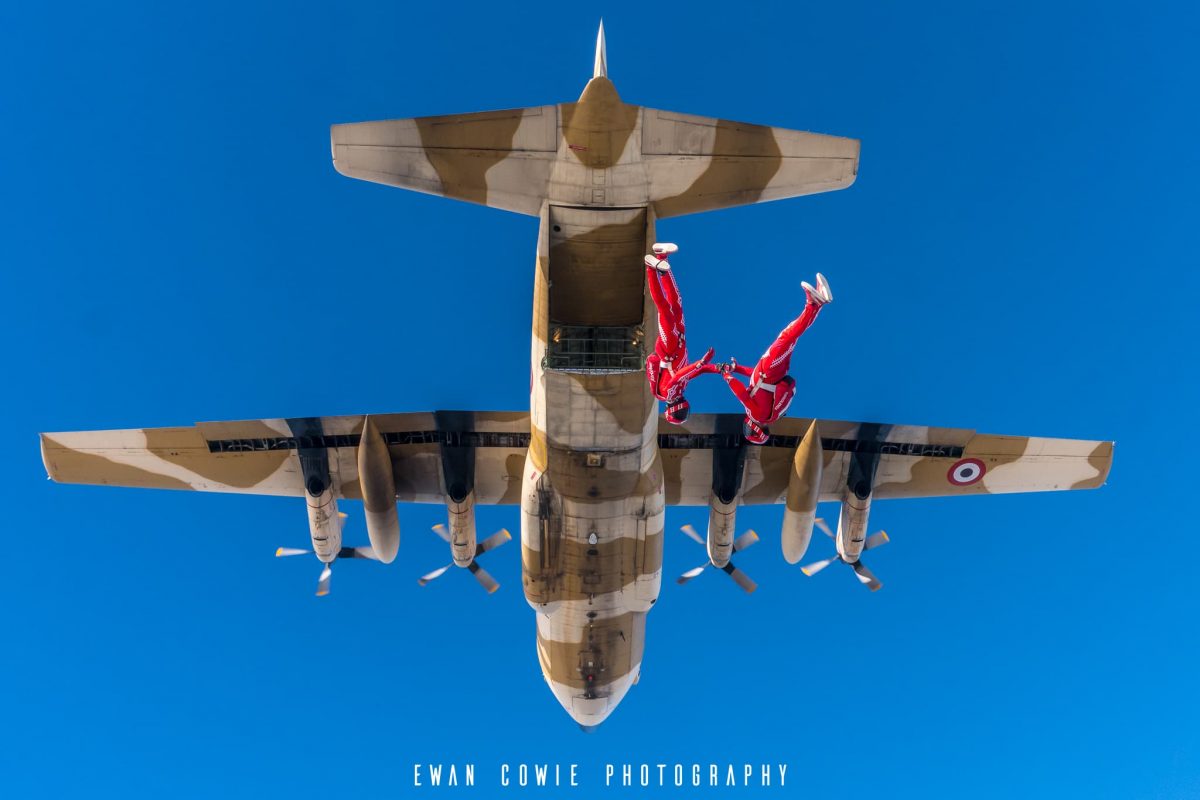 It wasn’t until 2015 when the duo wanted to push competition to a higher level. Karine said, “We had to be full time skydiving or in the tunnel. But Greg is the one who planted the seed for me to quit my full time job to coach with him at tunnel camps. A few months later, I ‘cutaway!’ It was scary at the time, but I have no regrets!”

“Karine gave me the encouragement to participate in the 2011 Euro freefly record,” Greg began. “I had another epiphany that I was able to allow myself to realize this part of my life. Since our first training camp in December of 2008, everything started to make more and more sense and people started to help us. Ray Kubiak, a well-known tunnel instructor, was the first one who gave me a strong dose of confidence. He helped me pass the first level of the IBA Tunnel Coach. It helped me progress and a year later, Frazer Smith – the only highest level tunnel instructor in Europe, helped me to pass this last step in tunnel instructor training. It was that moment I knew that I was going to have a career in skydiving.”

Looking back on a decade of competition experience, the two shared their many ups and downs from being unregistered at the 2011 World Cup, how their Federation prevented them from becoming the freefly European champions, from many camera busts costing them competition wins, and other struggles. All of this pushed them to reorganize themselves, convince a newly licensed jumper to delay his career to film the team. They welcomed, Baptiste Welsch to the team and things started looking up.

In 2016, Airwax finally became the freefly French Champions for the first time. In 2018 they had an amazing showing at competition scoring the highest average. Greg added, “At both events, the tension was high. We flew like warriors because we had to prove we were unbreakable.”

The team has racked up an impressive resume and they shared their greatest accomplishments:

Both of their World Cup and World Championship + the 4 World Records are our greatest accomplishments.

Even though skydiving is their full-time gig, they also have a passion for many things outside of skydiving. For Karine, she said she used to do a lot of karate and treasure those lessons she learned while training. She also likes to ride her motorcycle, scuba dive, and discover amazing landscapes. Greg added, “I am passionate about anything that combines balance and speed. I love everything that sails, dives, flies, and rolls!”

These two are definitely a force to be reckoned with, proving their dedication, skills, and powerful messages they bring in the skies during competition, and to those they teach. Competition is just one aspect of Airwax as there’s more to come. Karine is currently writing a book about their decade of competition, and about everything they’ve learned and about their adventures. “I am sharing my experience of mindset and dealing with pressure,” she said and concluded, “This is an opportunity to lift each other up!”

Greg is finding ways to share his experience in a way to help progress in the sport and in our culture. “I am working on a program for indoor and outdoor skydiving. In the next few years, I have a goal to become the Trainer of French skydiving teams, and I am really happy to continue being an international load organizer for special and exotic events.”