back in 1981 for the military. I just did one year as military service was mandatory in Italy at the time – but not anymore. Although I did choose to be a paratrooper. Then I kept going, I never stopped. After my service I decided to become a sport skydiver – so I took a course and started my career. It was with round parachutes at this time of course – but after thirty jumps with rounds, I started with squares.

Getting into competition is a fun story

I was really young but had a sponsor for my first canopy. Not a manufacturer, but a friend of mine. The club where I was jumping at the time was Cremona (SkyTeam Cremona) – famous for the Stradivari violins (Antonio Stradivari, 1644-1737) and they asked to meet my sponsor as they wanted to start an accuracy team. My sponsor asked who was on the team and they said this guy, that guy, this other one – but no Vito. Vito is not in the team. So he said okay then you have no money for the team. Vito must be on the team or you do not have a sponsor. Everyone was looking at me, so I said sure – let’s go. It is not like they had to kick someone out of the team to make a place for me. Usually (an accuracy team) is five people, but you need a sixth, seventh, sometimes an eighth person to support and act as alternates because not everybody is current or in good shape at the moment of the competition, or somebody has a problem and cannot go. You need to have strong alternates if you want to maintain a good team.

Accuracy was the first –

the oldest discipline in skydiving, and is also the biggest competition community in the sport. We have a huge number of competitions. If you are a good, motivated competitor you can attend like ten or twelve competitions per year. In the World Cup Series meets we have a limit of fifty teams in the competition – which is a very big number of teams for an event. There is always training beforehand, and the competition rounds happen on Friday, Saturday, Sunday. In most of the places, we use helicopters, which means we have a team in the sky every four minutes. This is the only way to have a competition with fifty teams. If you were to use planes, you wouldn’t have enough time to make the eight rounds as scheduled.

You have to have a tuffet on the dropzone to be able to train accuracy. For example, in Italy, we only have about five or six. It is really important to have the proper equipment, as the disc you are trying to hit (with your heel) is so small, just a couple of centimeters – like the size of a coin. Also, the technique is like sitting down on a mattress. You need to arrive really slow with a canopy that is close to stalling and then sit down after you hit the target – so the tuffet is necessary as you cannot practice the proper technique without it. 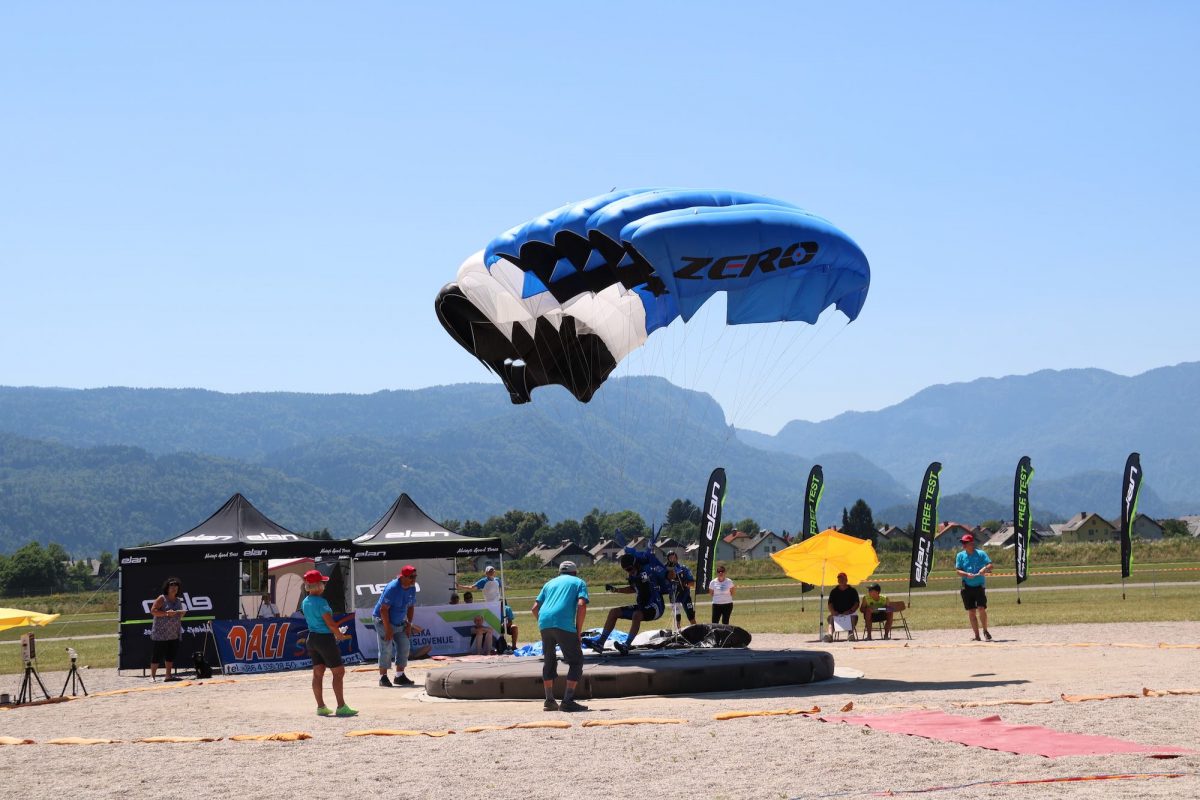 I use the PD Zero for competitions –

which was first seen in 2010. After that, a lot of people started to use it. We can say it is the last generation of accuracy canopies. It opens very softly and smoothly and flies well – very stable. It also lands very smoothly, so it has all of the three main characteristics you really need for accuracy – this is why people choose the Zero. The hardest part of competing in accuracy is to be consistent in your scoring. Competitions are usually eight rounds, plus a semi-final and final only in the 1st class competition, and to be consistent across the whole thing is very important.  To do well you have to hit the target and keep hitting the target.

On the Italian national team at the moment, there are two guys from my club Scuola Nazionale Bluesky. Then we also have two guys from the army and one from the Carabinieri (sort of military police).

In the PD Factory Team Accuracy

– of which CYPRES is one of our sponsors – we are six members. Four Italians, an American, and an Egyptian-American. The Italians are also part of my club team Scuola Nazionale Bluesky, so of course, we compete together when the others are not around. When there is a competition coming up, for sure we will meet beforehand to train altogether.

In the past we have often been asked if it is necessary to use an AAD system in accuracy. Of course, the answer is yes. Surely it will not happen for there to be collisions in flight, but the CYPRES gives you greater tranquility in the opening phase – and if you are a competitor of course you need a clear mind.

I do well under pressure

Of course, this is part of the game – especially when you are at the end of the competition and the level is very high. Depending on many things, everything can change in one second, such as changes in the weather like thermals and turbulence, so we have to constantly watch the weather in great detail. All the time between all of the rounds. To deal with the pressure you need to be quiet inside – not just for a single moment but for the whole jump. Quiet inside when you are in the aircraft, when you are flying, and when you land on the target. There are a lot of factors that can disturb you.

The disc is an electronic pad. If you hit the two-centimeter disc in the middle – you get the zero. Then you can see the double zeroes on the screen and hear the sound – beep, beep, beep. Otherwise, you will not hear the sound and you can see the distance from the zero – one, two, or three centimeters. We have only that – to hit the zero and to make sure you are keeping your competition going the right way. Zero or as small as possible. You have to keep everything under control.

This year has been difficult for everybody, as due to Covid-19 restrictions the entire competition season was compromised. However, in Italy we were very lucky that we managed to organise and run four competitions – two Italian championships (AeCI and AnPd’I – NAC/FAI and military competitions respectively) and the Dolomiti Cup. Also the WCS (Parachute World Cup Series) – the only one of the planned circuit of six planned world cup events.  Hopefully, things are much better in 2021 and we can get back to doing what we love to do.