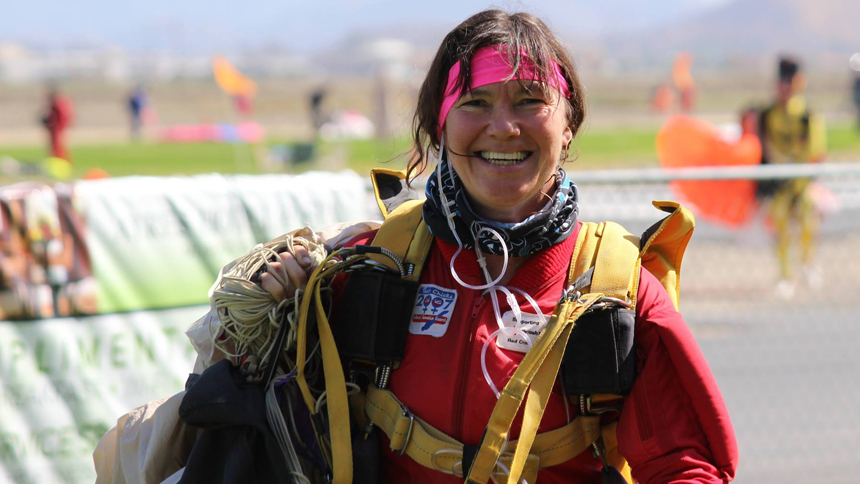 Lesley Gale is a household name in skydiving – especially in the UK. She’s been a part of skydiving for almost four decades and has been a part of multiple Euro, British, and World Records is the founder of Brit Chicks and the woman behind the beautiful skydiving publication, Skydive Mag. She’s a force to be reckoned with and is showing no signs of stopping!

Lesley was born in Scotland with one older sister. She fondly remembers, “all my family are Scottish – my parents, grandparents, all the way back. They are very proud, independent, strong-minded people who liked to work hard and enjoy life with a wee dram. (A ‘wee dram’ is a small whisky but Lesley recalls that there was never such a thing as a ‘small’ glass of whisky in Scotland!)

Lesley and her sister are chalk and cheese. Even though they were very different, they are close and Lesley very much adores her. “She would be reading books and I would be doing gymnastics, climbing trees, and getting up to mischief.” she chuckled.

Lesley was then raised in Durham, northeast of England called the “land of the Geordies.” She had won a scholarship to a posh school about 30 miles from her home. She said, “I traveled by train, bus, and underground every day, which I think gave me an early confidence traveling.”

It wasn’t until she went to a fair when she was around 9 years old that she saw the Red Devils skydiving team perform a display under PC Para Commander parachutes. “I can still see the ‘Kodak moment’ of watching the aircraft running in, seeing them get into freefall – oh how brave and incredible!” she thought. “Watching these guys in red jumpsuits under black and white parachutes land right in the middle of the arena was amazing and the best thing I had ever seen!”

Lesley was wowed by the demo but never thought she could do parachuting as a sport as it was thought of as a military activity. It was later on when she was at university that she went to a “Freshers’ Fair” (an event to help welcome new students where all the University clubs solicited new members. There were canoe clubs, climbing clubs, knitting clubs, and more.) There was a sign at this fair that immediately grabbed Lesley’s attention and it read: “Parachute Jumps – no strings attached.”

“I signed up without a nanosecond’s hesitation and went the following week to do my first jump and made a Static Line jump with a round C9 main and a I22 front mounted reserve,” Lesley shared. “I can still do my EPs for that kit!” she laughed. “At that time, I had never even been in a plane. Nowadays air travel is commonplace but that was my first aircraft flight, and it seemed strange the fuselage had a big hole in it!” she said.

She went on to explain that in those days jump centers didn’t have doors on the aircraft. “I remember being scared in the plane but they told us that you couldn’t land with the plane so you had to jump!” she continued. “So I figured if I had to do the jump, the best thing was to pretend I wasn’t nervous, act nonchalant, and get on with it. That attitude has served me well many times on world records, tight demos, nationals, and more!” 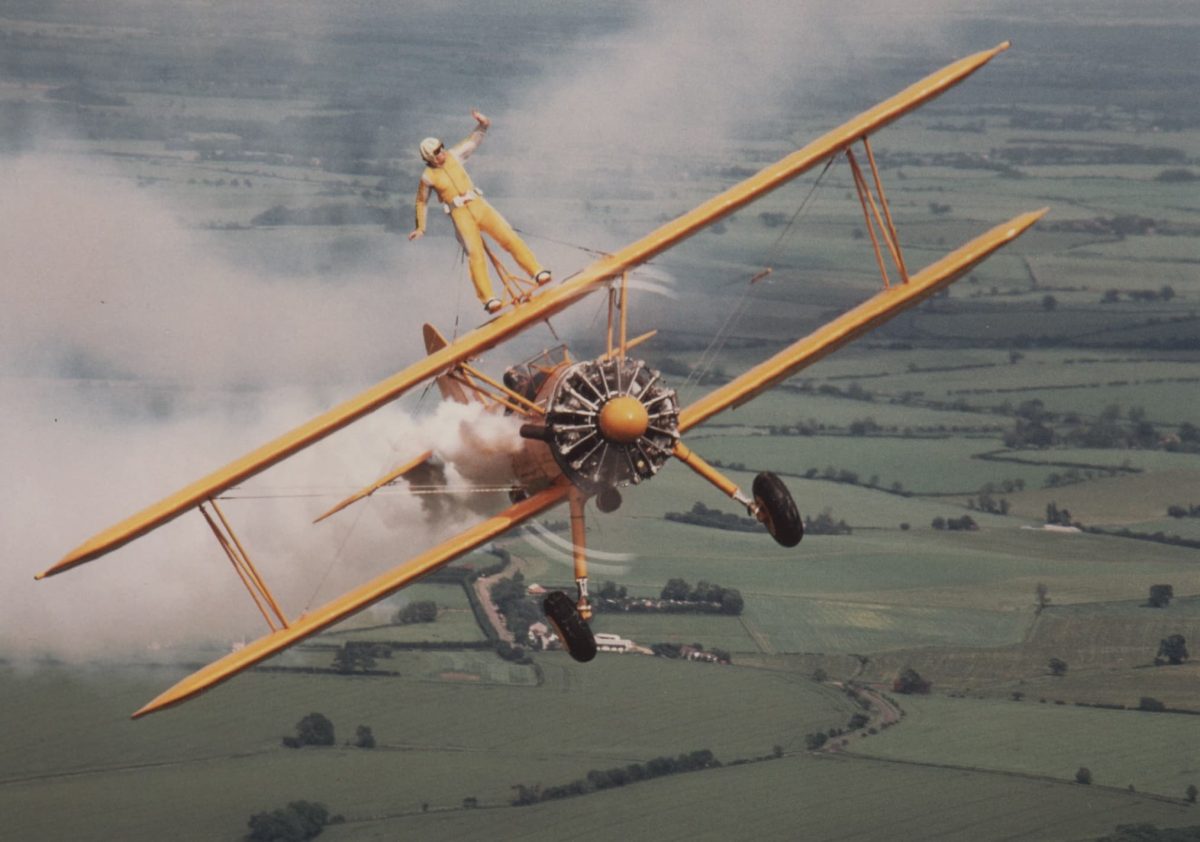 “With a round canopy, everything was so peaceful! It really is different,” she explained. “I went from all the fear and engine noise to the canopy being open and this blissful feeling of looking at this amazing view, knowing everything was good. I landed and walked straight through the others chattering, wasn’t that amazing, and I put my name on the board for my next jump!” Lesley made three static line jumps that day and returned the next week and qualified for freefall.

Lesley recalled being a model student as she progressed smoothly through the program. “I thought for sure I knew it all until about my 50th jump,” she began. “I had a brake fire on opening and instead of releasing the brakes and seeing if it would fly straight, I just cut away!” Lesley went on to say that she had been subconsciously wanting to have a malfunction, just to see if she could deal with it. “So I guess I made one up and didn’t deal with it!”

She continued, “Having cutaway I found myself under a round reserve with no steering toggles and four broken lines. I made a few half-hearted attempts to turn it into the wind but nothing was working. At this point I kind of gave up and figured everything was against me so I allowed myself to drift, landing downwind on a runway with a rubbish PLF! I ended up breaking my ankle but mostly hurt my pride and that taught me a LOT of valuable lessons!”

Lesley shared that there was nothing wrong with the reserve and the “broken lines” were intended to release, and you steered it by pulling a line either side of the missing ones. She had asked her instructor about the reserve kit, but didn’t fully understand it. She also didn’t like to ask more questions in case of looking stupid. “Well, I did when I broke my ankle!” And the other valuable lesson?  “Never give up! Especially in the sky! You are the only one controlling your destiny!” There was a moment that changed the course of Lesley’s life. When the British Parachute Association advertised looking for a part-time editor for their magazine, she immediately knew this role had her name on it and she applied. “After a couple of issues, I felt, this is it! I found my calling!” she exclaimed! “It’s now a passion that consumes me, and it’s a way that I can continue to give back to the sport, enthuse others, share the energy, pass on information, connecting people, and ultimately possibly save lives through our safety articles.” And she’s been publishing safety articles ever since.

The publishing industry is one of gathering and creating content. Deadlines. Assembly. And ultimately getting to publication. So how does Lesley stay balanced with her work and skydiving life? “Working in skydiving means my friends are also my readers, contributors, my sponsors, my advertisers, so it’s hard to draw a line between work and personal life. However, I always make sure if I go to an event as a participant, that I pre-publish articles to cover my time away so I can immerse myself fully in the skydiving experience without distractions. That’s a way I keep my passion for the sport.” she shared.

When you have been around skydiving for so long, and take shape as a leader, there are bound to be many experiences. Lesley has 11 World Records (in different disciplines of FS skydiving), 3 British Records, 4 Euro Records, has competed and medaled at more than 100 skydiving competitions, founded Brit Chicks, as well as earned the Royal Aero Club Award  Nexus Trophy for Sporting Aviation Journalism in 2009 and a RAeC bronze medal in 2007, we had to ask her, what her greatest accomplishments are.

She first shared about organizing many women’s records. “I am probably most proud of Brit Chicks national records. We set 4 records at 4 different events. It is the only non-invitational skydiving record event in the world. We organize the planes, and the logistics, and everyone is invited to throw their name in the hat. Hence, we’ve started many ladies on a big-way career by giving them a chance in the beginning.”

She went on to say that Brit Chicks bigway record events grew the percentage of women in UK skydiving by 50% and raised 40,000 GBP (over $50,000 USD) for Jump for the Cause in 2005, and 60,000 GBP for the British Red Cross in 2007. “Big kudos to fellow organizers, Kate Stephens, Kate Cooper-Jensen, Marloes Swarthoff, and Lise Nansen – we make a great team and that makes success!”

Lesley also shared that another great accomplishment is the Brit Chicks 8-way team, which ran for 6 years and became the first all-female 8-way team at an ISA event – 2 World Cups and a World Championship. She elaborated, “The team also helped to grow 8-way as a discipline in the UK and I am proud to see a high proportion of women still on the UK’s National 8-way team (Microclim8) through the stepping stone of Brit Chicks.”

“For over 10 years I took a scratch team to Nationals to give the British team a run for their money. Then, they would often recruit my talent for their new lineup. I was totally good with that, I just thought I’d give them a pool of women to choose from!” she smirked.

And not least, but her other great achievement includes creating Skydive Mag, which is a free online service to skydivers. Many aren’t aware that some countries do not have a magazine through their association. Lesley is proud to share hers worldwide.

When not skydiving or publishing for her magazine, Lesley enjoys the company of good friends, yoga, walking, cycling, tunnel flying, cooking delicious paleo food, Scrabble, and gardening. Sounds very much like how she was in childhood – always looking for fun and adventure!

What’s coming up? The rest of the year is tentative due to COVID, including the October 2021 International Skydiving Museum Hall of Fame event at Skydive Perris for the Largest Star Event (A Star is Born).

Lesley may be reached a variety of ways:

Skydive Mag: it’s free for everyone –

And we here at CYPRES are so fortunate to not only be a reader and a supporter, but a big fan of Lesley’s! Thank you for all you do in the sport for women and for safety!

At this point we’d like to congratulate Lesley for becoming a member in the Skydiving Hall of Fame. This honor is not given without reason and until now has been given to only a few women. Congratulations Lesley!