The Story of Reinier Bos and Ram Air Sky Sport 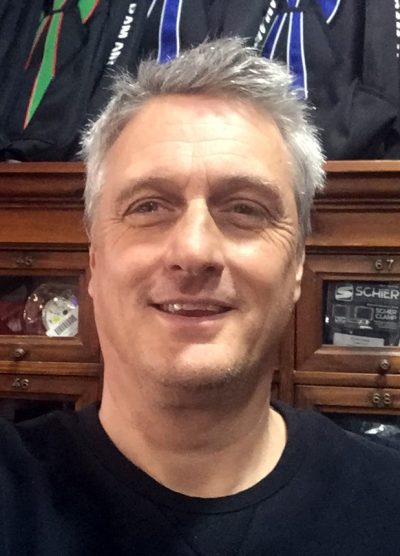 Reinier Bos is a familiar face to anyone who has had to pick up a Dytter battery during a jumping jaunt at Spain’s famed Skydive Empuriabrava–but that’s certainly not all he does over at Ram Air Sky Sport. The company’s headquarters–located just 100 meters outside Skydive Empuriabrava–presents a whopping 120 square meters of space, complete with workshop, sewing machines and retail floor. Reinier reckons it’s Europe’s largest skydiving business, supplying other smaller drop zones and several militaries as well as the individual jumpers who come through Empuriabrava.

Renier has been a constant presence at Skydive Empuriabrava since 1994, when he arrived from South Germany to make it his adopted home. When he arrived, he already had plenty of experience–he’d been part of the management in what used to be Germany’s largest skydiving club. Also, he had another really interesting distinction which is CYPRES-related: Reinier, while in Germany, was one of the first European skydiving students to be kitted out with CYPRES units. This was in 1991.

“The truth is, we weren’t aware of them,” he explains. “At the beginning, you think [skydiving in general] is all scary and that you are going to die, and you’re not thinking so much about the equipment.”

When the young student Reinier was gearing up, he was unwittingly on the vanguard of skydiving technology. Before the CYPRES, European skydiving students who were equipped with AADs were generally equipped with an FXC AAD. The FXC system was low-accuracy. Sometimes it fired too high; at other times, too low. CYPRES made it a goal to solve this, as well as a range of other accuracy- and reliability-related issues with the AADs it would come to replace.

At the time, Reinier had been studying Economics for an MBA in a German university.

“I was half self-employed,” he explains. “I was working for large companies in the purchasing departments for recycling machinery. I purchased recycling machinery that then was mainly resold in Asian countries. It was a regular office job. And it was very boring.”

“At the time,” he says, wryly, “I might have earned more money than in skydiving, but I think after so many years I did the right thing. I am not sure yet.”

During my AFF course, so it happened, that one team member of the South German 4-way team quit. The coach decided that, instead of taking on a more experienced skydiver with bad habits, to find a brand-new student graduate train them into the team from, essentially, a blank slate.

“I was either the lucky one or the unlucky one,” Reinier notes. “There I was, with 20 jumps, on the South German four-way team with very experienced people. When I had just 50 jumps, we had the first four-way training in the Czech Republic.”

Reinier’s fateful move to Spain originated, as luck might have it, as a joke. One day in 1993, he found himself in a conversation with a group of the owners and made a gonzo proposition. He said that, if one day they were looking for someone to work there, they should give him a call. He didn’t think they’d take him up on it, but they did. The following year, they called him back and asked if he’d be interested in working with them as load organizer.

“I made a very quick change of plans in my life and stopped everything I was doing at the time,” Reinier remembers, “and I came here to work.”

Reinier’s next contact with CYPRES was quite a bit later after his student days: 1996, to be exact, when the CYPRES was a reasonably well-established piece of kit, though it was still in its earlier moments. That contact came when Reinier started instructing for the dropzone’s AFF and tandem programs. In 2002, he founded the first European canopy school–Canopy School Empuriabrava–and in 2003, he opened the “Skyrats” gear store at Skydive Empuriabrava and became a CYPRES dealer.

The story of how Skyrats became Ram Air Sky Sport itself does much to illustrate Reinier’s personality, as it was motivated in great part by his admirable work ethic.

“I used to be a workaholic,” he explains. “I was never busy enough.”

The idea for the store originated from unwanted downtime. During the years that Reinier was doing AFF and tandems at Empuriabrava, there was plenty of time spent waiting on the ground–as it always is in skydiving. While he waited, he schemed. Instead of just sitting and watching the weather, he could do something else so as not to waste time–but what? Eventually, he decided to run an equipment store. He could do that no matter if the weather did or did not cooperate.

That first shop was, of course, Skyrats. In 2009, the company outgrew the space that had been proffered to him by the dropzone. Instead of staying small, he embraced the expansion. He converted the enterprise to the Ram Air Sky Sport we all know today and moved off the dropzone to found a significantly larger facility.

“In between, there has been one major event that made me stay forever with CYPRES,” Reinier notes. There was a very sad event before the Speed Cypres appeared.

A very good friend of mine with whom I lived for a little bit on the dropzone in Eloy [Arizona] died in a skydiving accident. The reason for this was that, at the time, there was not an adequate mix of equipment components. It was the time when the Velocity came out, and we were all jumping little Velocities but we still had regular CYPRES units installed in their rigs.  His high vertical descent rate exceeded the trigger speed of 35 meters per second of an Expert CYPRES and made it open his reserve and go into the main. The canopy technology was ahead of the AADs.”

“It was a difficult time,” he continues, “But I remained loyal to CYPRES because of the response to the problem. Other AAD companies did not react in the same way. The representative that was working for CYPRES at the time enlisted many phone calls, and many hours to research and to tell us what happened, why it had happened, where the errors were, why there were errors on the canopy pilots side. They took a lot of time to explain to us what went wrong. Other companies just ignored the problems. My relationship to CYPRES became closer just because of the professional way that CYPRES was working at the time.”

Since that terrible incident, Renier has become one of the staunchest industry supporters of Airtec and its CYPRES technology, and his business–Ram Air Sky Sport, one of the world’s biggest skydiving gear suppliers–carries no other AAD but CYPRES. It’s the support of skydiving industry professionals like Renier that has helped us to continually develop the most accurate, reliable automatic activation device available to the world’s skydivers, and we couldn’t be more grateful.