If you ask pretty much any skydiver what SSK is and does, they’ll immediately start talking about CYPRES. If that’s your knee-jerk reaction, too, lean in: There’s far more to it.

While that’s not an unfair assumption–after all, SSK has been the US Stateside service center for the German-manufactured AAD since back in 1991–the full story of SSK is much richer (and more interesting) than that would imply. SSK President Adam Schmucker, son of SSK Founder Cliff Schmucker, tells that story best.

“We’re in a unique situation,” Adam explains. “We’re not a manufacturer in the classical sense, but we’re not just a normal gear store, either. We occupy a pretty rarefied niche. And SSK is so closely tied in with Airtec that a lot of people still think we are the manufacturer.”

“Although I wish I could take credit for that,” he laughs, “We are not.”

First off: SSK predates Airtec by eight years. It debuted in 1983, started up by Adam’s dad, Cliff, along with a couple of his friends. The little crew of maker-skydivers built harness-container systems, and the entire operation was housed in a tiny shack at Skydive Cincinnati, a small Cessna drop zone in Waynesville, Ohio. One of their creations–the “Sweethog” container–was manufactured up until 1995.

Aside from his jumping, designing and sewing, Cliff was the President of the Parachute Industry Association for twenty years. It was at a PIA meeting when Cliff and CYPRES inventor Helmut Cloth first crossed paths. Helmut debuted his new technology to a bug-eyed crowd, and Cliff hustled over to ask his own battery of questions.

“They really hit it off,” Adam says. “They spoke the same language on a technical level. My dad was an electrical engineer, so he understood the potential of using electronics for an AAD, although at the time there was a lot of doubt surrounding that. And on his side, Helmut knew that, for his big idea to work, there had to be a US-based service and support center to handle the amount of skydiving here, and to help with the time zone differences, especially for West Coast dropzones.”

Cliff dove right in. Cliff decided, on his own, to perform an independent set of tests so he could tell other jumpers with confidence that the CYPRES works. To wit, Cliff and two others performed actual live jump tests, as well as drop tests, to confirm Airtec’s results. It was around that time that Adam first met Helmut. Adam was 7 years old at the time.

As the seasons rolled past, Cliff started getting more and more involved with the CYPRES. As his CYPRES involvement ramped up, he let the Sweethog disappear, concentrating his energies on collaboratively perfecting the AAD. For his own part, Adam was content to be a skydiver. He loved his dad and was inspired by his entrepreneurial spirit, but held no aspirations to be part of the family business. 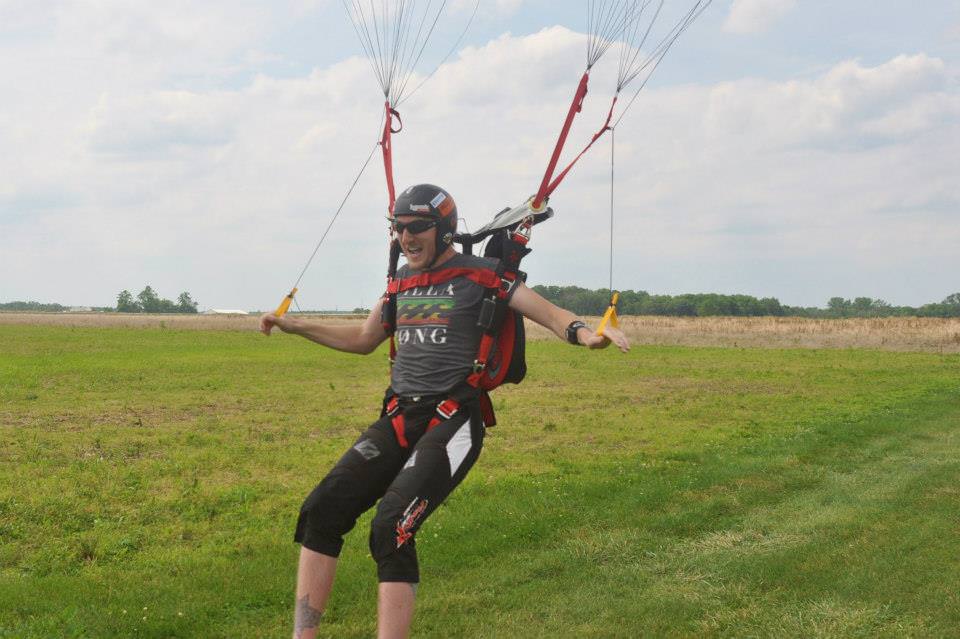 When it was time to go off to school, Adam headed to Miami University (in Oxford, Ohio) to major in Marketing and minor in Entrepreneurship. He jumped constantly during his years at school and, when he graduated in 2010, went back to work at SSK. Things were really picking up speed by this point. SSK had moved out of the little shack and into a three-building complex of three warehouse-sized, purpose-built structures. Set up to be a mirror image of the home factory in Germany, the Ohio complex sports identical equipment and works like a backup, offsite server. The design goal is simple: if a disaster occurred either in Ohio or in Germany, although response times would be delayed, the remaining facility could take over and maintain forward progress while the recovery efforts took place.

“My dad fell out of the sport as he was getting older,” Adam remembers, “But as I started jumping more, he really got into it. He was at the drop zone just as much as me.”

In 2013, however–when Adam was just 25–his course changed completely. Cliff passed away in a skydiving accident. Amidst the shock and mourning, it was time for Adam to take up the helm.

“Luckily, at that point, he had me getting involved with more things in the business,” Adam says. “It was definitely a lot of flying by the seat of my pants and learning quickly. It was tough to take over the management role. It was hard at the beginning and it’s sometimes challenging trying to be the boss, but I’m lucky to have the team I have. For the most part, it’s really easy going. Everyone gets along.”

There were a lot of moving parts to oversee, as Adam well knew when he stepped into his father’s place.

“There’s a lot more that goes on behind the scenes than people realize, especially on the maintenance side,” he explains. “It’s not like we just get the units, change the battery and say okay, here you go. There’s pretty extensive testing involved.”

“It can be like any small business,” he continues. “That is to say: pretty hectic. We have 12 employees, including myself. We constantly have lots of CYPRES units in for maintenance, and we always have testing going on, both civilian- and military-side. On any day, we never know how many CYPRES units may come in. Sometimes, we get random surprises from the military–a box of 150 units will show up without any advance notice, for example. We are all cross-trained in different areas to pick up slack when we get slammed like that.”

There’s a lot of behind-the-scenes collaboration that takes place between SSK and Airtec, too. All of the departments at the two companies communicate daily. Cross-continental conversations unfold every day regarding marketing, IT, service questions and, as Adam puts it, “any random projects that come about.”

With all that going on, it might be a little amazing that SSK has a life that extends beyond its family ties with CYPRES. Indeed, it does. For example: Last year, SSK became the service center for all of the Larsen & Brusgaard altimeters outside of Europe.

Since the mid-1990s, the company has also been working with the manufacturer of a military parachuting simulator–Systems Technology, Inc., based in California–to continually develop and distribute that company’s full-immersion VR simulator. As you might imagine, recent VR technology has upleveled that offering like a rocket ship. SSK designs and builds the hardware in Ohio: a slick-looking frame with the motors mounted at the top, along with a variety of military harnesses adapted for the purpose.

“It’s an amazing piece of kit,” Adam grins. “You actually fly the parachute and deal with malfunctions. When you’re in it, there’s a strap around your legs that holds you horizontal for freefall and releases you on opening. The frame actually lifts you up by the risers to simulate line stretch and responds realistically to your inputs.”

On the manufacturing side, SSK fabricates a range of military-side accessories that must be US-made: altimeter wrist mounts and CYPRES pouches among them. They also make carrier plates for the navigation boards that hold a military parachutist’s compass, GPS and altimeter on HAHO jumps.

“They’re up in the air at 25,000, going through clouds, at night, under the worst conditions possible,” Adam explains. “it just helps get them to where they need to be so they can start their real mission.”

Adam’s “real mission” at this point, as he explains it, is to get more current as a skydiver. A diehard freefly guy, he’s lucky enough to live directly between two active dropzones: the little Cessna operation where SSK was founded and the much-larger turbine DZ of Start Skydiving in Middletown. With that real estate, it might be shocking that it takes such an effort to get on a load–but SSK is a more-than-full-time job, and Adam truly loves it.

“I get the best of both worlds, but since I took over the business my numbers have dwindled. I think I did like 35 jumps last year. I had to upsize my canopy,” he laughs. “It’s a difficult thing to do, but you can’t let your ego get in the way. Anyway, I’m going to focus on getting in the sky a little more often. I miss it.”

Even though it has kept him on the ground more than he’d like, for Adam, the hard work is worth it.

“I am fortunate to be able to work with such cool people and great companies,” he continues. “And we’re always here for support, even if it’s just a quick question from a rigger or a jumper. We want people to know we are here to support them. I can honestly tell you that we love our customers, and nothing makes us happier than helping them out.”