Commonly only one aspect is seen to test the reliability of an AAD. But there is much more about reliability than activating at preset parameters. We also learn about reliability when devices find their way back to us. From time to time, remarkable devices are sent in to us via regular maintenance or individual processes.

For example, decades ago and well before the advent of swooping, we wondered about rusty equipment and what scenarios might have led to it. We learned from this and then developed the first waterproof AAD – an enormous design, manufacturing and handling challenge. Today, with the CYPRES 2, waterproofing is standard.
Or isolated devices whose conspicuousness was not so obvious to decipher. We’re persistent with analysis, and insights lead to action. For example, more comprehensive test scenarios, lines of research and continuous development in electro-magnetic compatibility were then implemented.

Sometimes it is also that devices show us that we are simply fundamentally doing a great deal right. For example, the proverbial reliability of CYPRES. In the context of this story we do not mean that, to our knowledge, not a single CYPRES has failed in its elementary task of cutting the loop. But see for yourself:

What seems so unspectacular at first glance is the number of jumps that have been made with this device:

A remarkable achievement. Especially when you consider that a CYPRES is permanently working after it has been switched on, and that it has to do this faultlessly in order not to provoke false activations.

Friends of numbers will surely find further perspectives to classify this performance. For example you can set the number of jumps in relation to the price for purchase and maintenance.

Calculating with a purchase price of 1200 USD and 2 maintenance sessions for 200 USD, which is roughly high for the calculation:

In tandem use per person thus with 7 cent. 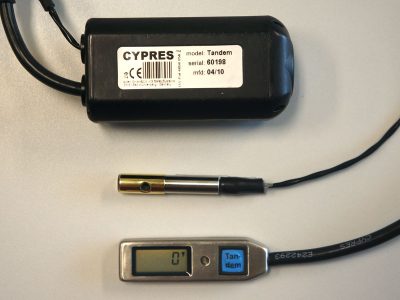 Such high numbers of jumps are also not unique, especially tandem devices in use at the highly frequented DZs in the temperate climate zones of the world often show an amazingly high flight counter.

To be sure, an AAD does not guarantee an unscathed outcome to an emergency situation in every case. But the last 32+ years have shown how drastically CYPRES has reduced the risk of skydiving. And this with a very low effort for the jumper in relation to the task.

Another aspect of our reliability – not only from a technical point of view – is still on the sidelines:
The Tandem CYPRES 2 serial 60198 was sent to us for repair in June 2022 because small black spots appeared on the display. Only an optical issue with no significant effect on use and no effect on function. We repaired it free of charge as part of our product philosophy and returned it to the owner. Over 11 1/2 years after purchase and even though the device will reach the end of its service live in 4 months.
But that could still mean hundreds more jumps and possible rescues. A single possible rescue makes the question of the economic sense of a repair at such a high age seem directly absurd to us.

Take a look over the shoulders of your neighbor or the tandem pilots at the DZ, ask them and take a look at the number of jumps of the installed CYPRES. We’d be happy if you tell us more about astonishing jump numbers on a CYPRES: Please feel free to send us your findings.