If the Red Bull Stratos project could be defined in one word, it would be: variables. The variables associated with a jump from 39,045 meters (128,100 feet) are unlike any other project we have worked on. Our challenge was to create a CYPRES device that would monitor a whole new set of parameters which included extreme acceleration (breaking the sound barrier) enormous changes in air pressure, extreme temperatures and cosmic rays. The end goal for the device was to correctly interpret what was normal during completely abnormal conditions and where no test jumps could be made.

With the world watching, the stakes were high. If all went well, no one would know CYPRES was on the mission and that was our hope. If the CYPRES deployed when it shouldn’t have, the world would know we were there… failure was not an option.

The Red Bull Stratos Project was a huge  challenge and major moment in our company’s history. We were tasked with creating an AAD for use in space with full functionality. The device that had to adjust with air pressure measurements in “real-time”, and able to function correctly with almost no readable air-pressure. Meeting these requirements challenged our engineering team. We’re proud to say that we overcame all challenges to meet the needs of the mission.

How We Overcame Extreme Temperatures

Our solution was to chill the device well beyond what was expected on the jump. Using liquid nitrogen, the entire device was cooled to -180°C / -292°F and tested for functionality to ensuring the cutter would still do its job. We’re happy to say, it worked!

Contending with the effects of cosmic rays and supersonic speed goes beyond the parameters of a typical CYPRES 2!

As one travels away from the earth, there is less protection within its atmosphere. With this high altitude jump, the issues of cosmic particle radiation, damaging Gamma-rays and Beta-rays can wreak havoc on electronic devices. Creating a new housing for the CYPRES processing unit would be part of our agenda to ensure the processor never failed.

Additionally, we had to create solutions for reading air pressure during supersonic speed. Until the Red Bull Stratos project, no data existed which forced us to develop our own research and development to evaluate the extreme conditions for activation criteria.

The challenges of this project went beyond atmospheric variables. With a customized parachute system, we also had to adapt our device to work with a different container and parachute system. Because Felix would be using a drogue to slow his descent, the CYPRES would need to cut away the drogue chute prior to the reserve opening. To make this happen, two cutters would be used. One cutter in the traditional reserve container and the other on the drogue release system.

The Stratos CYPRES in Real Time

Having taken the individual variables into account, we now had to look at the entire project to ensure the device would work in real-time bringing all the variables together throughout a five minute period. We identified six distinct phases where the device would be tested. They were: 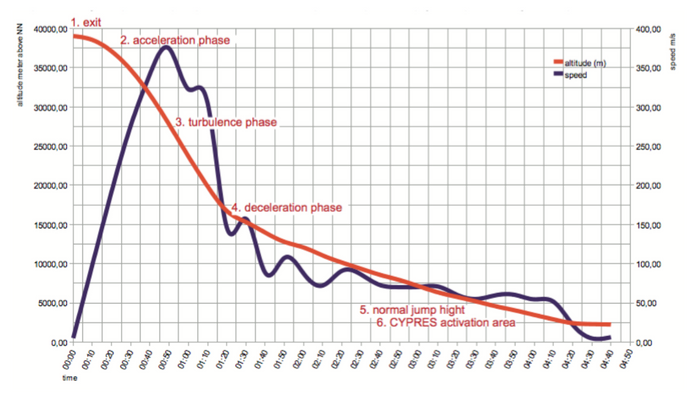 The CYPRES During Exit

Unlike the CYPRES 2, the Stratos CYPRES would need to be switched on just prior to exit. The CYPRES was connected to the capsule with an activation cable, similar to a static line. On exit the static line would be pulled out of its metal housing, thus switching the unit on. After a 5-second delay, the device would change into monitoring mode, which is comparable to the Expert CYPRES as it would measure air-pressure and the calculation of altitude and speed throughout the jump.

Have you ever seen a dislodged GoPro falling to earth rotating at extreme speeds? Imagine that x 100! This rotation and speed could create special challenges for the CYPRES’ sensor and programming. We only had the ability to simulate these forces on a computer, but no tests under real conditions. At approximately 46.5 seconds into his jump, Felix broke the sound barrier. We’re happy to say the CYPRES performed perfectly through the acceleration phase!

When descending from such a high altitude, air resistance does not increase linearly. Differences in density and a heavily fluctuating upstream flow can lead to violent turbulence. Seconds after hitting the sound barrier, Felix started to experience flat spins at 3G’s. This was anticipated and we knew it would be vital for the CYPRES to continue working through these conditions. We’re proud to say, the device did its job here also.

Throughout all phases which involved tremendous acceleration, fluctuations in pressure at high altitude, the Stratos CYPRES worked flawlessly.

At approximately the 1:04 mark during the jump, Felix was at approximately 18,300 meters / 60,000 feet. This altitude is where the air density increases which would allow Felix to gain control. This range is familiar territory for CYPRES devices and would be a major milestone for the device to reach coming through more challenging phases.

As a derivative of Military and Aircrew CYPRES the activation altitude for the Stratos CYPRES had to be programmed manually with an air- pressure value prior to the jump. With 35 m/s (78 mph) the activation speed is the same as for the Expert CYPRES, as rig and canopies were adjusted to the special jump conditions to reach a normal descent behavior.

Throughout all phases which involved tremendous acceleration, fluctuations in pressure at high altitude, the Stratos CYPRES worked flawlessly. Felix’s canopy flight was controlled and so the Stratos CYPRES did not intercede. Had Felix become unconscious during the turbulence phase, the CYPRES would have deployed at 800 meters / 2,625 feet above ground level in Roswell.

Due to the fact, that the landing area in the desert was approximately 230 meters / 750 ft higher than the take-off elevation, the reserve canopy opening altitude would have happened at approximately 580 meters / 1,900 ft. This is sufficient for a safe landing with the reserve parachute.