Let’s get to know this UK based, CYPRES sponsored athlete a bit better, shall we?

Skydiving was something Brian had always wanted to do. Nearly every summer as a child, Brian and his family would attend air shows – for Brian, the highlight was always the exhibition parachutists who would jump in.

Brian’s parents purchased him a jump for his birthday, and after one, he was hooked. He made two static line jumps on a round parachute in one day, and scheduled a course to do a static line jump with a square parachute that October – not realizing just how weather-dependent skydiving was or how fickle the weather in his region could be.

When he arrived at the dropzone, the winds were “blowing a gale”, and while he was able to take the course, he wasn’t able to make a jump. To make matters worse, Brian wasn’t really able to connect with anyone at this drop zone, and missing the critical component of community, he never went back.

About three years later while at University, Brian discovered that many of his peers were also interested in skydiving, and so, Brian decided to start a skydiving club. Finally with a group he could enjoy the sport with, Brian’s skydiving progression gained traction, and he hasn’t stopped since!

In 2013, Brian was faced with a difficult choice: face cancer in later life or undergo preventative major organ surgery to remove his large intestine. In fairly good health and with his whole life ahead of him, he opted for the latter.

Brian’s doctors advised him to take it easy after surgery, urging him to stay the full five nights in the hospital that they recommended and advising him to wait at least 6-weeks to return to work, even if he felt up to the endeavor. Unfortunately, in Brian’s words, “everything that could go wrong, did go wrong.”

Five nights in the hospital became 12 weeks and six weeks off work became six months. Never a heavy person, Brian also dropped about 20 kilograms in the first month after surgery. His body was weak, but his spirit was not. Rather than be defeated by his experience, Brian used this struggle to reframe his perspective:

“When I was in the hospital and I’d lost a lot of weight, I was stuck in the bed. Just walking to the end of the corridor and back would cause me to break out in a sweat. It was slow going and super painful, and it made me really think : if you had nothing in life, what’s the one thing that would make you happy?…What’s the simplest pleasure? For me, it was just feeling the sun on my face. It didn’t matter about anything else, as long as there was the sun on my face.  I remember that now. Even if everything that day is going pear shaped, I still have the sun on my face, and that makes it a pretty good day.”

Since his surgery, Brian has run several marathons, completed long-distance bike rides, qualified as a skydiving instructor in the UK and the USA and set two skydiving world records in different disciplines, Formation Skydiing and Wingsuiting.

Donning A Different Kind Of Suit

After a varied career path that included becoming a mechanic, returning to university as a mature student, and a stint in student politics, Brian found himself working for an investment bank. For nearly 10 years Brian was a spreadsheet jockey, but in 2015, he made the decision to become a professional skydiver. And so, Brian went from donning a suit and tie each day to zipping up a belly suit.

For those who’ve never made such a leap, trust and believe, becoming a full-time skydiver on an island with a seasonally stunted skydiving season isn’t for the faint of heart! Like many in the industry, in past years, Brian has taken up additional part-time jobs to supplement his income during the winter months. However, for the last 18 months, he has exclusively been working in a sky (or tunnel) involved capacity.

Though working freelance may not provide the security a traditional position might, it allows him the freedom he desires to spend ample time with his three year old daughter: a benefit Brian is incredibly thankful for.

Now a prominent big-way event organizer in the UK and Europe, Brian’s first foray into being a big-way skydiving leader was rather unconventional. After attending a Christmas Boogie, Brian was approached by the organizer and asked to be a plane captain for a lower-experienced big-way group – which, mind you, is a perfectly normal way to become involved in a leadership role. The unconventional part? At the time, Brian only had 450 jumps himself!

After this opportunity, Brian began dabbling more and more in the big-way scene – until he eventually became the one running the big-way events. Though running these camp style events requires Brian to do a great deal of the administrative work behind the scenes, he finds big-way camps have a certain allure that general organizing doesn’t:

“My favorite thing is working with a group three or four days in a row, and seeing where we can take the entire group – rather than people dropping in for a jump or two and moving on and moving out…I love having a solid group where I know their backgrounds, and I’ve seen them fly. We can push on. I can tweak the slotting, and we can get some really nice results.”

Back in 2009, after spending the season traveling back and forth across the Atlantic to attend P3 big-way camps and events like the Arizona Challenge, Brian had a realization : the British 100-way national record hadn’t been rivaled or attempted for more than 10 years (23 years now in 2022). He began to wonder: had the time come to try and break this record?

The goal is a lofty one. Between the weather, general logistics, and the difficulty involved in securing enough aircraft, breaking the 100-way record won’t be easy. Initially, Brian sought to find someone else to spearhead organizing the record attempt, but after running a PUPs (Parachutists Under Phorty) event in 2019 that drew over 115 people – he realized two pivotal things.

One, though those jumpers may not yet be ready to tackle the record – with practice and time, they could be. And two, if he could manage the logistics behind the PUP’s event, he could do this : he could be the one to organise an event to set a new Brit record.

Over the course of three events, Brian hopes to build the skills of the would-be skydivers who will help break the Brit 100 record and also hopes to grow as an organizer alongside them. The first event was scheduled to occur in 2020, but in the wake of the global pandemic, Brian’s timetable shifted. Now, he aims to re-launch the endeavor in 2023.

With Brian’s goal set to achieve the record in 2026, it’s entirely possible that someone just beginning their skydiving journey could end up on the record! Who knows maybe you, dear reader, could be on that big-way jump!?

“When everything clicks, when everything goes to plan and time just slows down. You can see everything. You can see the choreography that you designed, and it’s working… It’s a feeling of fulfillment…It’s a bit of inner peace within the skydive–where it’s clear we are a team of 12 or 24 and everything is working exactly as planned. For me, that’s the best bit…because it definitely isn’t the admin!” 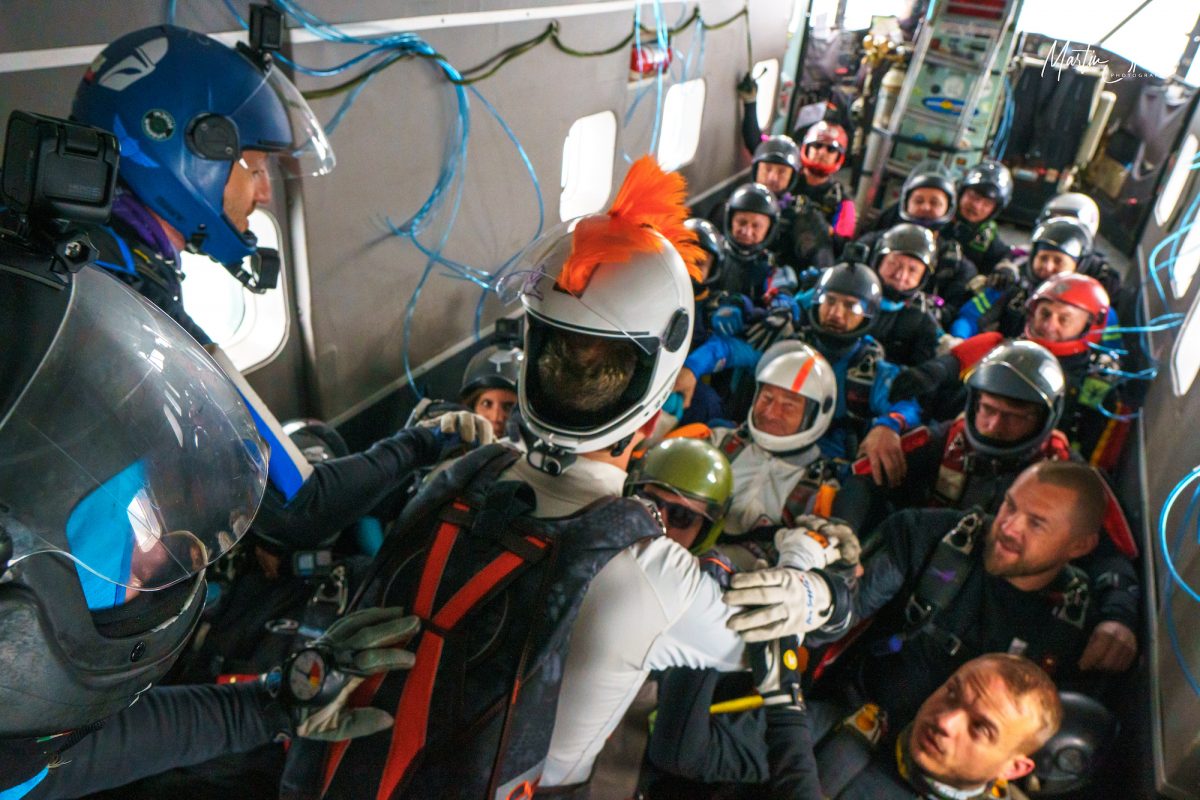 “I love the reliability. When I first started in the sport, I used a different brand AAD. There was a two year period where it had to go back to the factory three times for update or repair. I work in the sport, and I only had one rig at the time. I can’t work with a rig that’s not airworthy – makes it hard to earn money! I try not to borrow gear – that old saying “the deceased was found in borrowed gear” makes me think twice before borrowing.

I’m delighted to be part of the CYPRES family. My daughter will be three by the time this is published. I owe it to her to make the best equipment decisions possible. My SunPath Javelin container, my PD canopies, my CYPRES AAD, My Cookie helmet and my Symbi FS Suit. It’s the dream team, right there.

If you look at the stats, CYPRES has been going 31years, and there have been 5100+ saves. In 31 years there are 11,300 days. That works out about a save every other day – this blows my mind. The numbers are phenomenal and the CYPRES AAD is proven over and over.”