When Andy Grauwels, David Grauwels, Sven Ibens and Roy Janssen scraped a four-way RW team together in 2002, they can’t have known what they were in for. Nobody could’ve. You can’t predict a legend, after all.

From the first moment of their team-up, it only took the foursome two years to compete in their first world championship. In just two more, they placed in the single digits. This was, of course, in the amateur category–but they were beating the full-time Belgian military professionals. When that military team fell apart, the Belgian government came to Hayabusa with a deal: drop everything to make skydiving your day job, and we’ll start handing you paychecks.

Sven demurred, but the others accepted the proposal all-in. Suddenly, they were full-time army guys with on a hard-earned (and government-gilt) road to success.

Dennis Praet wasn’t there at the beginning, but, as Point, he’s a cornerstone of the team now.

“I joined after the world meet in 2010,” Dennis remembers, “At which point I’d only been in the sport for five years– but I’d been spending a lot of time training with Hayabusa members.” 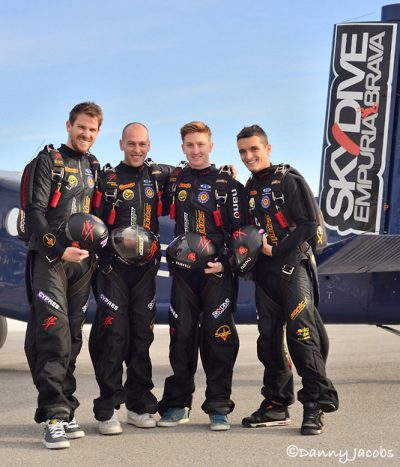 His early performance made his famous coaches sit up and take notice. The team was looking to replace a member, and Dennis was the natural choice: Since he was already a member of the Belgian army, it just took a few phone calls to change his job title from “tank driver” to “pro skydiver.”

When Dennis finished his first team training camps with Hayabusa in September of 2010, the team immediately started collecting gold. “We won every single indoor competition that was out there,” he muses. “My first outdoor meet in Dubai was the following January. We won that one as well.”

The pace has not slowed a bit. The guys travel constantly, competing and training. For a team like Hayabusa, putting together the team calendar is a candy-store experience–if you don’t like to go home, that is.

“Every year, of course, is the world cup,” Dennis says. “We fill the rest of the year with competitions and training. You can’t do everything, of course–every tunnel wants to have its own competition now–so we choose the ones that are most important to us, and then we find room in between to do our training camps, and during the season we’re in [Skydive Empuriabrava, in Spain] for two weeks every month, training.”

“Basically,” he laughs, “We never jump in Belgium.”

This year, all that training has a laser focus: September’s world championships, set to be held in Chicago.

“It’s going to be a very big year,” Dennis smiles. “And it’s going to be very interesting. Arizona Airspeed did a member switch just after the World Air Games in December, so we really hope that they can bring their A game to Chicago. We want to have a good fight for that medal

We love a neck-and-neck race. The satisfaction is so much more rewarding than just going through the motions and getting the trophy.”

“We always approach a competition as if we’re all alone,” he explains. “You just try to push yourself, try to push the sport to push the boundaries of what’s possible. We are having a lot of fun, and we are working very, very hard, investing everything, and it’s our job to make sure that comes through in our performance”

“As a team, we of course look forward to the world meet, hoping to have a good battle there and, at the end, to win. Then we’re competing at the indoor world cup in Poland–at Fly Spot– and the Clash of Champions, in Dubai, where we will try to go against a four and an eight way with Thunder.”

That schedule, of course, doesn’t leave a lot of free time. When those few moments of his own come along, Dennis has a plan.

“I absolutely love wakeboarding and kite surfing, so I’ll grab my boards whenever I can. And,” he laughs, “I look forward to freeflying a lot more.”