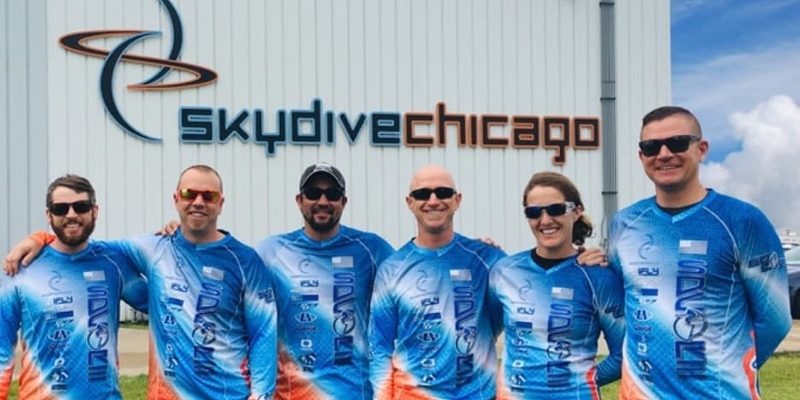 Are probably just a few words that would describe the incredible couple that make up two players on the 4-Way VFS team, SDC Core – meet Stephanie “Steph” Strange and Jason “JRuss” Russell! SDC Core has dominated the 4-Way VFS scene for over a decade and have become leaders in the vertical world. Today we get to spend a little time getting to know these two a little better.

in what she calls, “the middle of nowhere Colorado.” She remembers her and her brother would catch toads and lizards and in school, she studied and was into basketball. JRuss recalls growing up in ‘sheltered suburbia,’ Appleton, Wisconsin. While Steph was into playing outside, JRuss’s childhood consisted of playing a lot of Dungeons and Dragons.

“In high school, my parents had a rule that I play seasonal sports, or I have to get a job,” Steph recalls. “I didn’t want to run track so I got a job at the small skydiving club called, Front Range Skydivers. I worked in the store selling tickets and snacks to jumpers.” She remembered at that young age that skydivers were a little nuts.

“At the time, I’d never even flown in a commercial airplane, but when I turned 18, all the staff decided I was going to do my first jump. I didn’t really want to and was terrified from gearing up, getting in the plane, flying to altitude… but the second we were outside the door, I fell in love with skydiving. I knew instantly that I was going to figure out how to make skydiving my life.”

JRuss remembers a friend of his doing a tandem and said he wanted to learn. He then asked JRuss if he wanted to. “I was constantly recovering from motocross injuries – multiple knee reconstructions – and thought, skydiving might be a fun and less dangerous sport.”

which happened the next day after the ground training. “I remember the pilot chute had an old PVC handle. I couldn’t find the handle in freefall so my instructor tried to assist but instead, he put his finger through the PVC handle. Then I grabbed onto his hand. He pulled his hand to get away from the grip and deployed my pilot chute at a high altitude. I spent the entire canopy ride thinking that I failed because he pulled the pilot chute!” However, JRuss was a pretty good student. His instructor’s combined his level 4 and 5 jumps and while he celebrated in front of the other staff, the dropzone owner was mad that his instructors did that because he wouldn’t get money for the Level 5!

Although Steph knew skydiving was for her, the biggest catch was that she was 18, broke, and about to start college. “It was 3 years later that I went through AFF during the Holiday Boogie at Skydive Arizona. I remember on my first AFF we actually landed in the plane because it was too windy for me to jump. After we touched down in the plane, it swerved and hit a fence! That was pretty scary for me! However, I got back up and did well.”

and did AFF/Tandem video on the weekends. He sold his bar when he became a tunnel instructor and still side hustled as a bartender. And that’s when they first met – at the tunnel in Colorado. Steph said, “I was a front counter staff and Jason was an instructor. When Colorado first opened they were very generous with staff flight time and I was hooked and I wanted to fly every second that I could and so did Jason. I was only allowed to fly with an instructor and most of the instructors never wanted to fly, but Jason always did. I always looked forward to the days he worked so that I could fly and learn more.”

At fifty jumps Steph became a tunnel instructor. “At the time I said I didn’t want to work in skydiving because it was my “fun” thing. However, I got an opportunity to work overseas at Skydive Dubai doing tandem video. I eventually got my AFF rating after 500 jumps.

A year later JRuss moved to Abu Dhabi and JRuss asked Skydive Dubai if they could form a VFS team with a few other staff members. It was approved and they began by working AFF and video jobs and then training VFS after. Steph continued, “When we came back to work the next winter, the company changed our job to train VFS full-time. Having that as my job was pretty epic!”

That opportunity gave the duo a chance to learn and grow as skydivers and become really proficient in all things VFS. JRuss added, “When we moved back to the US, making skydiving our career just seemed to come naturally. Having all these experiences and being able to pass it on to younger jumpers allows us to keep doing what we love, and help others reach their goals.”

Steph said, “He was my coach before we started dating. I think that helps us be on a team and be a couple. I know that if he’s telling me something, it’s just to be helpful.” JRuss added, “Being on a team with Steph is great. Because we both work in skydiving, we often coach people on the same weekends but in different locations. So when we are team training, we get to be together.”

One of their favorite memories of being on the team was at US Nationals at Skydive Chicago when they were on their former team, Skydive Dubai Nexus. “When we were leaving Dubai for the States, I got told at Passport Control that I couldn’t take the flight because my work visa in Dubai expired that day and wasn’t canceled. The company we worked for told me that while in the States to add pages to my passport so when I returned, they would add the New York visa,” Steph reminisced. “The team left a few days ahead of the competition which allowed me to sort out my visa issue. I arrived in Chicago just a few hours before the start of competition and the airline misplaced all my luggage! I borrowed a rig, shoes, a helmet, and weight belt. Luckily, our new jumpsuits were shipped to the DZ so I had my own jumpsuit! We ended up doing all 8 rounds in 1 day. I was sleeping in the plane – completely asleep during the ride to altitude – and my teammates would wake me up and we’d go jump. Believe it or not, we ended up setting a World Record in one round and won the competition.”

What was the lesson you learned? “It was a true test of distraction control!”

The duo shared their greatest accomplishments in the sport. Steph said the medals they’ve won, but more so, the people they’ve coached to be their best, and to see students progress and succeed. “It always feels like the greatest accomplishment,” Steph added. And for JRuss, it’s being on a World Champion team with his wife.

Not much exists outside of skydiving for Steph and JRuss as it’s their life, lifestyle, work, and play. “Outside of skydiving – is that a thing?!” jokes Steph. However, they have a lovely pup, Mia who’s Steph’s soulmate (don’t worry, JRuss knows… It was in their wedding vows!), and JRuss spends time playing a computer game, Dota as well as building things and helping those in need. 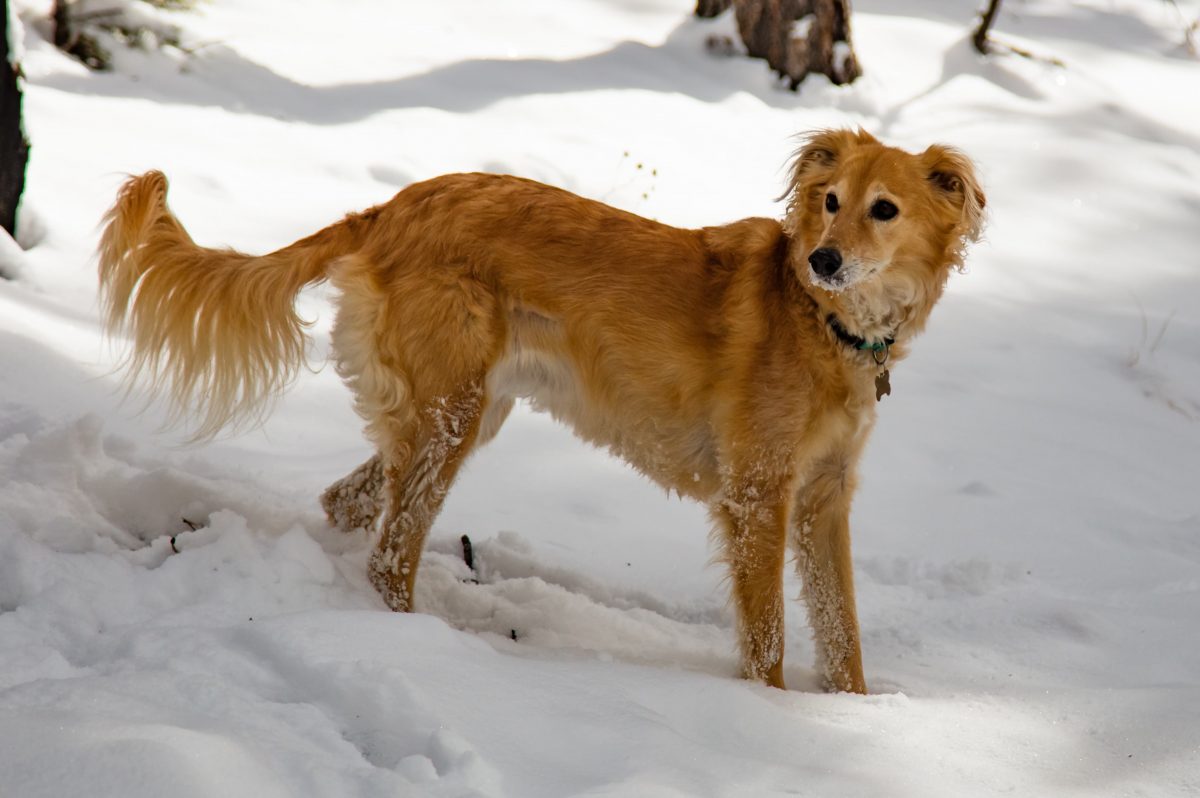 TBD Tunnel camp in the 32 ft tunnel where we will be doing sequential dives and flipping formations with different skill level groups.

“We’re gonna keep doing what we’ve been doing,” says JRuss. “It’s sometimes a thought, for me, that younger people will come and challenge us since most people my age have moved on to other things. I’m still having fun, and kinda operating on the old spartan motto of “come and take it”. When that happens, I’ll reconsider. I really think it would have been a bummer for me if the teams that were at the top of VFS had retired before I had a chance to beat them. Hopefully some teams out there are listening!”

If you’d like to follow SDC Core or some of their members, be sure to check out some or all of their channels here: