When I talk to Red Bull Air Force athlete Amy Chmelecki, she sounds as happy as she is tired–and boy is she tired. She’s just trundled off of a 20-hour flight from Dubai to Texas (after banging out six hours in the windytube, naturally), and she has a big ol’ big-way camp on the very immediate horizon. She has a plan, though: she’s convinced Joyriders teammate (and stalwart travel buddy) Anna Moxnes to raid Whole Foods for cookies. Amy will be the first to tell you that she’s “not a big planner,” but she’s certainly got this whirlwind-travel thing on lock. Suffice it to say; her smile isn’t fading.

Other than having perhaps the very best imaginable life in airsports, Amy has even more to be cheerful about this week. She and her Red Bull Air Force teammates are celebrating their new partnership with CYPRES. We’re thrilled to have the team on board, of course–and I was stoked to take the opportunity to pick Amy’s freshly-cookied brain about what it’s like to be one of skydiving’s very favorite people.

Q: Before skydiving, what did you wish to do with your life?

Amy: Honestly? I had no plan. I grew up in the New York City suburbs, and went from high school to college 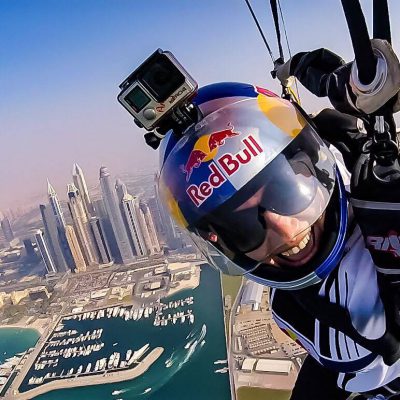 without any aim in mind. I always played sports–that was always my thing–so I didn’t really have a plan beyond “do more sports.” For me, life was field hockey; soccer; track; rugby. I didn’t really know what I wanted; nothing grabbed me. Okay, as a child I had dreams, but they changed every five minutes. I’ve never been a big planner. I like going with the flow.

Q: So–you did that first jump and it was all over, huh?

Amy: Well, kinda. I was 18 when I did my first jump, and I was broke. At the beginning, I’d do 20 jumps a year, maybe. After college, I got the brainwave to move to Skydive Arizona and start bartending. I figured I’d just goof off for a year and figure the life thing out later. Well, I bartended for seven years, and I’d spend all my tips on jumping. It was easy to do–I mean, I lived in a trailer on the DZ, so I had no rent; no bills. I didn’t care about anything else. People slowly started hiring me for coaching, and before I knew it the sponsors started happening.

Melissa Nelson Lowe asked me to move to Skydive Chicago and train with her. We formed The Sugar Gliderz– a 3-way girls free fly team, sponsored by Skydive Chicago. It was my first sponsorship, and we did that for three years. I’d travel to Chicago for the summers and go back to Skydive Arizona in the winters. We were training, but there was no means to make money, so I basically just saved up money in Arizona and lived on it in Illinois.

The Sugar Gliderz had a good run, and when it was over, Skydive Arizona asked me to put together a team for VFS, which was a really new discipline at the time. I said sure, and I called it Arizona Arsenal. The first person I asked was Steve Curtis, and he and I picked everybody else. Arsenal charged hard from day one! Sure, we had our ups and downs as a team, but we were all committed and flew our asses off! Arsenal is going into its 11th year this year, and we’re all really proud of it.

Being invited to join the Red Bull Air Force–that, obviously, was amazing. I still can’t believe that I get flown all over the world not just to skydive, but to do amazing feats and see amazing things.

Q: Since joining RBAF, what is the coolest thing you’ve done thusfar?

Amy: Definitely, the jump over New York. It’s my hometown. My mom was there! It was the first time I’d seen New York like that.

Even though it was a simple line, I was pretty new in a wingsuit, and everything had to be done at a certain height, in a certain formation, in a certain relation to the Freedom Tower to get the shot. We landed on a barge on the Hudson River in front of a big audience. It was a full-focus mission, getting the job done. Intense.

Q: Does anything actually scare you?

Amy: Being lied to. And jellyfish.

Q: Of all the places you’ve visited in the world, is there a place you’d love to explore more?

I feel like I’ve gotten a taste of a lot of places, and everywhere I’ve been, I’d be happy to go back and get to know it better. I’ve been to Switzerland a dozen times, but I’d love to go back anyway. And Asia! I’ve only been to Singapore; there’s so much on that continent to experience.

Q: You could choose to fly with any gear. Why CYPRES versus a different AAD manufacturer?

Amy: The history and the track record. Definitely.

I haven’t had an AAD fire–and I actually haven’t had any close calls– but I’ve seen my friends get knocked out in freefall. This is serious stuff, and I want to go with a company who’s been there and done that. 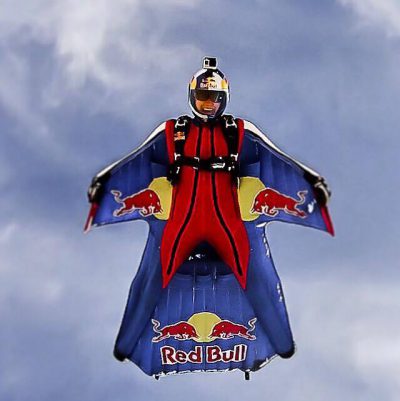 Q: If you could give one good piece of advice for a new skydiver, what would it be?

Listen. Concentrate and focus on your instruction. Avoid getting complacent once you get used to skydiving.

As a new skydiver, you’re scared and you really respect the sport. At the beginning, skydiving is something you can’t really believe is possible; once you realize you can do it and you learn the equipment, and then if you’re not scared, you can get too comfortable. You need to remember your training. I see a lot of people get hurt when they become complacent. Don’t let that be you.

Q: What do you do when you’re not in the sky?

Amy: I hang out with my grandma, do yoga, eat good food and sleep.

Seriously, though, my grandma is great. I love spending time with her and finding out about our history as a family. I like cooking Italian food, because I grew up in an Italian family; I like enjoying a good meal. I like really crazy evenings, but I also like really quiet evenings. I like exercising, but sometimes I have fun just…not.

I really love focusing on my career. And I know it’s weird, but I like doing office work. The logistical part of what I do is a massive workload, but it feels so good to get it done. And it’s a nice contrast to skydiving, being in a controlled environment, on my laptop, in my pajamas.

Q: From the Sugar Gliderz to Arsenal to the Red Bull Air Force… your progression through the ranks of the sport is something few have achieved. What do you attribute this success?

Amy: It boils down to commitment.

Commitment always came easily to me. I would go with the flow and enjoy it. Getting here, there was a lot of drama, body aches, broken bones and living in a trailer, but I was always having fun and I was always all-in. Okay, maybe there was a nagging something in the back of my head, like, go get a job, but how the hell could I stop chasing these incredible opportunities? So silly.

Even though it’s a marathon, there’s so much joy. So far I have not wanted to change this way of life, but I am open to what comes–ya know, going with the flow!