How the story of CYPRES started

It was in the 1980s, and Helmut Cloth’s skydiving friends were dying.

On a bigway qualifying jump in 1986, his dear friend Freddy Leising had a pilote chute in tow malfunction to which he did not respond in time. He was pretty sure Freddy’s death – all those deaths, really – were preventable. He had to do something.

He had officially seen enough.

Helmut Cloth is no showboater. He hangs out at the periphery of the boogie campfire-never in the spotlight- and he’s no big talker. In 1986, he was just as busy as he is soft-spoken – a serial entrepreneur and an engineer, as well as a very active skydiver – but the chain of fatalities and near-misses that was unfolding in front of him obviated a point of utmost clarity: it was going to be him that fixed the problem. He was the guy who could build the solution. He knew this. Helmut already understood the manufacturing process from his other ventures. And he was starting to see, bubbling out from the aether of his engineer’s mind, the way it might be done.

There have been 4 AADs on the market, but they were not as we know them today. They were comparatively enormous, for one thing, with steampunk dials and a spine-searing 22-caliber firing mechanism. These clunky, main-lift-web-mounted Rube Goldberg machines injured – sometimes, even killed – the people who trusted them.

Nearly all parachutists were afraid of those AAD´s. Those that had a choice did not use them unless they were a student or required to by the military, and even then that did not always mean the devices were turned on. Most people even refused to jump together with others if they had an AAD installed.

Helmut had even seen several AAD misfires in person, but he was still convinced that the basic idea was a sound one. It just needed a lot of finesse to get to the point of 100% reliability – which, for Helmut, was non-negotiable. It was going to be called the Cybernetic Parachute Release System – more pronouncably, the “CYPRES” – and it was going to change everything.

Helmut broke down everything that was wrong with the AADs that were currently on the market. He identified thirteen major failure points. With the drawing-up of that list, for Helmut, the starting gun had fired.

There were challenges, of course – hundreds of them, ranging from piddling to apparently insurmountable. The device had to work for every skydiver, from the skies over the swampiest armpit of Florida to the parched Namibian desert. It had to have pinpoint accuracy. It had to be tiny. It had to draw a miniscule amount of power. The device had to reproducible in great volume. And it had to work one hundred percent of the time. Suffice it to say: Loads of people were certain it couldn’t be done.

Luckily, loads of people thought it could.

Specialists came out of the woodwork. Experts in aerodynamics, thermodynamics stepped up. So did machinists, physicists and engineers (both electronic and software). The next four years saw thousands of hours of testing. The team was keenly aware that they were reinventing the wheel–and Helmut was making sure that nobody fell asleep at it.

As engineering tricks go, the accurate measurement of altitude wasn’t a terribly impressive feat even in the late 80s. What was a design coup was in the details: the hyper-precise measurement of altitude by a tiny, low-power mechanism that integrated seamlessly into the protected parts of a skydiving container. Helmut and his team went through a laundry list of multifarious iterations–including radar and sonar–before they designed the world’s very first air-pressure-responsive digital altimeter.

Once that little impossibility was tidied up, there was still no time to rest. Each of the thirteen points was a looming hurdle to clear. The team kept clearing them.

Another example:
Like everybody knows, the air-pressure is altered by the weather. (high and low pressure areas) Those changes in air pressure would also change the activation altitude of the AAD. If those changes in air-pressure are severe, then the activation will happen too low and the parachutist could not be saved.
To avoid this, it is necessary to calibrate the AAD to the correct air-pressure before each jump. The parachutist could calibrate his AAD manually himself, but an AAD can also be smart enough to automatically do this continuously and takes this responsibility away from the parachutist. As it showed up, this elementary feature was for decades only realized at CYPRES.

A long way to go

After four years, when the CYPRES team had – miraculously, by all accounts – produced a working device, there was one more requirement to meet. It was, perhaps, the biggest of all: the question of how to produce enough of these tiny, perfect, überprecise lifesavers to outfit every single skydiver in the world. Helmut leapt in, renting half a building in Bad Wünnenberg, Germany. He designed a factory in rise to the creaking burden of challenges: among them, a highly specialized staff and a downright punctilious quality control system.

CYPRES celebrated its first save just weeks after the first device rolled off the assembly line. To this day, Helmut has never forgotten that phone call. More and more saves were following.

The CYPRES reliability paved the way for profound changes in skydiving. Back in 1991 almost nobody jumped with an AAD. The reliability of the CYPRES changed this 180 degrees. Today it is the opposite, almost nobody is jumping without an AAD anymore.
The result of all the reliable CYPRES units is an additional and immense safeguard to the sport. This also created a relative save flair in the skydiving world and many people came into this sport which would have not had any interest in skydiving before. There would have been thousands of fatalities if CYPRES would have not been developed. Which now have been avoided. Many of those fatal accidents would have happened on tandem-jumps. Imagine all the lawsuits especially in the USA, they would have ruined harness/container manufacturers and DZs and most likely tandem-jumps would be banned completely by the Aeronautical Federations. Without the commercial profit from the tandem business, many drop zones would not exist and many of the commercial parachuting schools would not be able to operate their business and run expensive turbine air planes. The situation of the complete skydiving scene would look totally different today.

Adapting new demands from the sport

Of course, 31 years do not pass without developments.
The CYPRES 2 proves to be a remarkably stable design base on which we continuously develop.
Various adaptations and models followed over the years on this basis, which we adapted for the respective requirements. There are now more than 34 civilian and military models available, all serving specific scenarios.
The best known are the Expert, Changeable Mode, Tandem, Speed and Student CYPRES. Most recently, the WSC – especially for wingsuiters – was added to these. 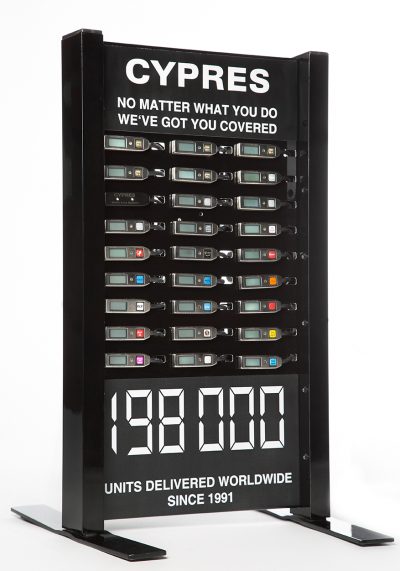 Some developments were also adopted for the entire product line and resulted in immense improvements to the basic system. As a result, we were able to certify a longer service life of 15.5 years for all devices as of 2017.
As the sport evolves, we continue to drive the development and standard for AAD’s.
It is a constant challenge to improve a globally established and valued system without sacrificing established features and specifications. Many features that are a gimmick for one are essential for another.

Facing this challenge – ensuring the best possible safety for every single jumper on every jump is our drive, our passion and our intrinsic commitment.

CYPRES withstands the test of time

On January 10th 2022, CYPRES celebrates its 31th birthday. First sold on that day in 1991, and to date and to our knowledge without a single instance of a failed device. In total, CYPRES has been along on 165 million jumps; in all that time, no CYPRES has ever failed to activate, and no CYPRES has ever failed to sever the reserve loop. Helmut Cloth has received every major award for his technical achievements and he even personally developed a CYPRES for the Red Bull Stratos jump. But that’s not what he’ll tell you if you have the chance to ask him someday, in the plane on the way to altitude. He’ll tell you that his device has, to date, saved more than 5,200 lives.

Maybe it’ll save yours, one of these days.